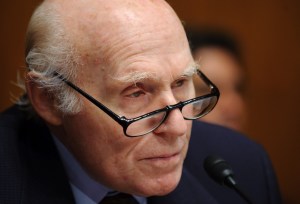 Last week, the U.S. Copyright Office announced that it has opened an inquiry into a federal resale royalty bill for visual artists that was proposed at the end of last year by legislators, suggesting it has a shot at finding its way into law.

In December of 2011, Senator Herb Kohl of Wisconsin and Senator Jerrold Nadler of New York proposed a bill that would require auction houses to pay a 7 percent royalty on resold work (the current bill does not apply to private sales, such as through dealers). Needless to say, the law has generally not been popular among auction houses, but it appears to be on the fast track in Washington. The senators brought it to the Copyright Office in May to assess how artists are protected (or not) under existing copyright law, and how a resale royalty would affect the sale of artwork generally. The inquiry opened Sept. 19 and lasts only 45 days, about half the time of usual comment periods in Washington proceedings. (The inquiry closes on Nov. 5, the day before election day.)

The present bill comes after years of false starts. In 1993, Senator Ted Kennedy introduced a resale royalty bill that received a mixed reception from the Copyright Office. But since then, more than 60 countries in Europe have decided to give artists a royalty under certain conditions when one of their works is resold. Senator Kohl is also retiring at the end of this term. A source speculated that a Democratic senator could pick a worse way to go out than finishing what Ted Kennedy started.

Internationally, resale royalties are increasingly prevalent. This year, putting the pressure on the U.S. a bit, the U.K. passed legislation to grant heirs the same resale rights as artists. Currently in the U.S., only California has passed resale royalty at the state level, but it’s rarely enforced due to a number of exceptions (the artist must be a U.S. citizen or a California resident of at least two years; the seller must live in California or the sale must take place in California; the list goes on).

“We’re one of the only Western nations that doesn’t have this right for visual artists,” said Ted Feder, the president of the Artists Rights Society, which represents the intellectual property rights interests of over 50,000 visual artists. “This idea of a later reward for creative work is something that exists in all other creative endeavors. Actors get residuals. So do playwrights and screenwriters. The California law was ignored more than it was respected.”