Golden Dawn is a Greek neo-Nazi party that has gained an alarming amount of power as Greece reacted to harsh government austerity measures. In an effort to reach out to Greek expatriates, Golden Dawn has opened an office in New York.

Salon reports that the party calls its American outpost “Golden Dawn New York” and the party has set up a creepy website.

Golden Dawn New York’s “About Me” page explains that it “unapologetically stands for the sovereignty, security, and dignity of the Greek people.”

Golden Dawn elaborates on what that means before concluding with this chilling statement:

We must resist and overcome the genocidal multi- culturalist, and anti-Hellenic agenda of the New World Order.

The unholy alliance of the bankers, the media, corrupt politicians and the educational system are rabidly attempting to extinguish all traces of Hellenism- past, present and future through poverty, historical revisionism, media distortions and third world immigration.

The Golden Dawn is the only party that truly recognizes the problem and has the solution.

While Neo-Nazi groups in the United States are the very ragged edges of the far-right fringe, Golden Dawn has achieved real wins in Greek elections.

The party has been linked to anti-immigrant violence and even overt public acts of violence against political opponents: Golden Dawn spokesman Elias Kasidiaris struck a female politician on live TV. 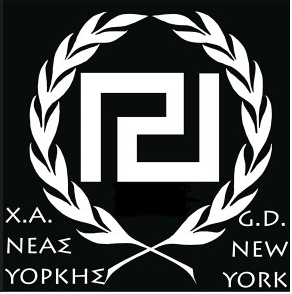