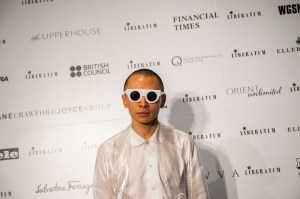 When you step off the elevator in the nondescript Flatiron building that houses Terence Koh’s latest project (at 1133 Broadway every night from 7 to 9 p.m. through Sept. 22), you’ll feel a bit lost. The hallways are painted a dull yellow and have linoleum floors, like a public high school, and the room numbers are in the four digits because you’re up on the 26th floor.

The correct room soon becomes apparent, though, as its numbers are in white instead of black, like the others. But here things get hazy: this reporter was relieved of his notebook shortly after arriving. What else do I remember about the experience? I knocked on the white door, and a white twentysomething guy, dressed in black monk’s garb, held a finger to his lips, admonishing me not to talk. With notecards inscribed in curling script, he explained that this was “One Person at a Time,” and that I should put everything I had on me in a toolbox outside the door; that I would receive a key to this toolbox; that I was to remove my shoes once I got to the anteroom, whose white neon signs proclaimed beauty and truth.

There are three rooms, all completely white (Mr. Koh’s signature color). The first room is long, and it leads straight back to a window. If you walk up to the window, you can see other windows opening into homes, offices. You’ll be surprised people aren’t looking at you, the freak in the all-white apartment, and yet you’ll feel worse that they don’t because it makes you feel mute and invisible on top of everything else. Near the door to the second room, a wax ear rests on a lightbox. It’s fair to say that the whole thing induces some anxiety.

This anxiety does not abate in the next room, where one mannequin stands over another mannequin that reclines in a white psychologist’s chair. In the silent apartment, both are easily mistakable for real humans. In fact, they both look a lot like Mr. Koh, but a mutilated version: one lacks an ear, the other a hand.

Mr. Koh has placed a white moth on one of the shelves near the door to the next room, where one of the mannequins’ hands rests on a bedside book about religion. As you sit on the white cot and look out a window at a perfect view of the new World Trade Center, you might think to yourself, “This could be about 9/11.”