Senator Schumer, with David Tisch and Jessica Lawrence at his side.

Today, Senator Charles Schumer popped up to New York City for a visit to General Assembly and an announcement: Tomorrow he plans to introduce new legislation to the Senate–the snappily-named BRAINS Act–in an attempt to help alleviate the tech talent crunch by making it easier for startups to hire foreign-born workers.

Everywhere he goes, said Senator Schumer, business leaders cite the lack of technical talent as their number one challenge. “With the introduction and hopefully the passage of the BRAINS Act, we’re going to move closer to ensuring a more vibrant future for Americans not even born yet,” he promised.

Silicon Alley’s desperate need for workers made General Assembly a logical venue for the bill’s debut. “We in New York have a big dog in this fight,” said Senator Schumer. “Silicon Valley may have given us the semiconductor, but New York City is the birthplace of the next generation of Internet giants–but they won’t become giants unless they can get the talent.” And, while CornellNYC is already taking applicants, those candidates aren’t going to be hitting the workforce any time soon.

“All of us here care so much about the tech community–it really is our future in New York City, New York State, U.S.A., and the world.”

Of course, those common desires can make for some moments of cognitive dissonance. As the cameras were setting up for today’s press conference at General Assembly, a lovely metaphor for the tech world’s relationship with politics unfolded before Betabeat’s eyes: A tattooed man wearing a t-shirt saying “Your Mom Makes Great Sandwiches” wandered through a cluster of suit-clad politicos and notebook-clutching reporters.

The problem with the status quo is this: Foreign students who graduate from American universities with STEM degrees have to compete for an extremely limited number of H1B visas. That means many are forced to go home empty handed, and even if a startup wanted to hire them, it’s impossible.

“If the Yankees needed a new center fielder, and the best person available was from Japan or the Dominican Republic or Cuba, it’s inconceivable they wouldn’t get a visa,” pointed out Senator Schumer. “But when one of the startup companies here has a brilliant engineer who they’re almost certain could create a company that might create hundreds or even thousands of jobs, we won’t let them come.”

“We should run our economy the way we run our sports immigration,” he added.

But the Senator was merely warming up to his topic. “All these talented people from overseas, they want to come here, and they want to stay here. And we kick them out! It’s unbelievable,” he said. “It’s the dumbest, stupidest policy that one could devise.”

“If someone wanted to devise a policy on how to prevent American from growing good-paying jobs in the future, they’d probably design our present immigration policy. It just doesn’t make much sense.”

As for the bill’s prospects, well, it’s far from a sure thing. The hope is that a window for political compromise might open up after the elections, during the lame duck session of Congress. And Senator Schumer was upbeat, emphasizing that his counterpart in the House, Lamar Smith, is introducing a similar bill with several potential points of compromise. “I believe we’re closer to this compromise than we have ever been in the past,” promised Senator Schumer.

Then again, he shared another anecdote that makes the odds look a little iffier: “I had one senator say to me, a conservative Republican, even if Albert Einstein wanted to immigrate I wouldn’t want to let him into this country.”

But Senator Schumer has a colorful, locally sourced rebuttal to that: “When I was a kid, we had this thing at Coney Island. It was a barrel you’d walk through as it turned,” he explained. “New York is sort of like that barrel–it takes people from all over the globe, we turn into Americans, and their kids sally forth around America and do great things.”

“I just wish the rest of the country would understand our experience on how positive immigration is.” 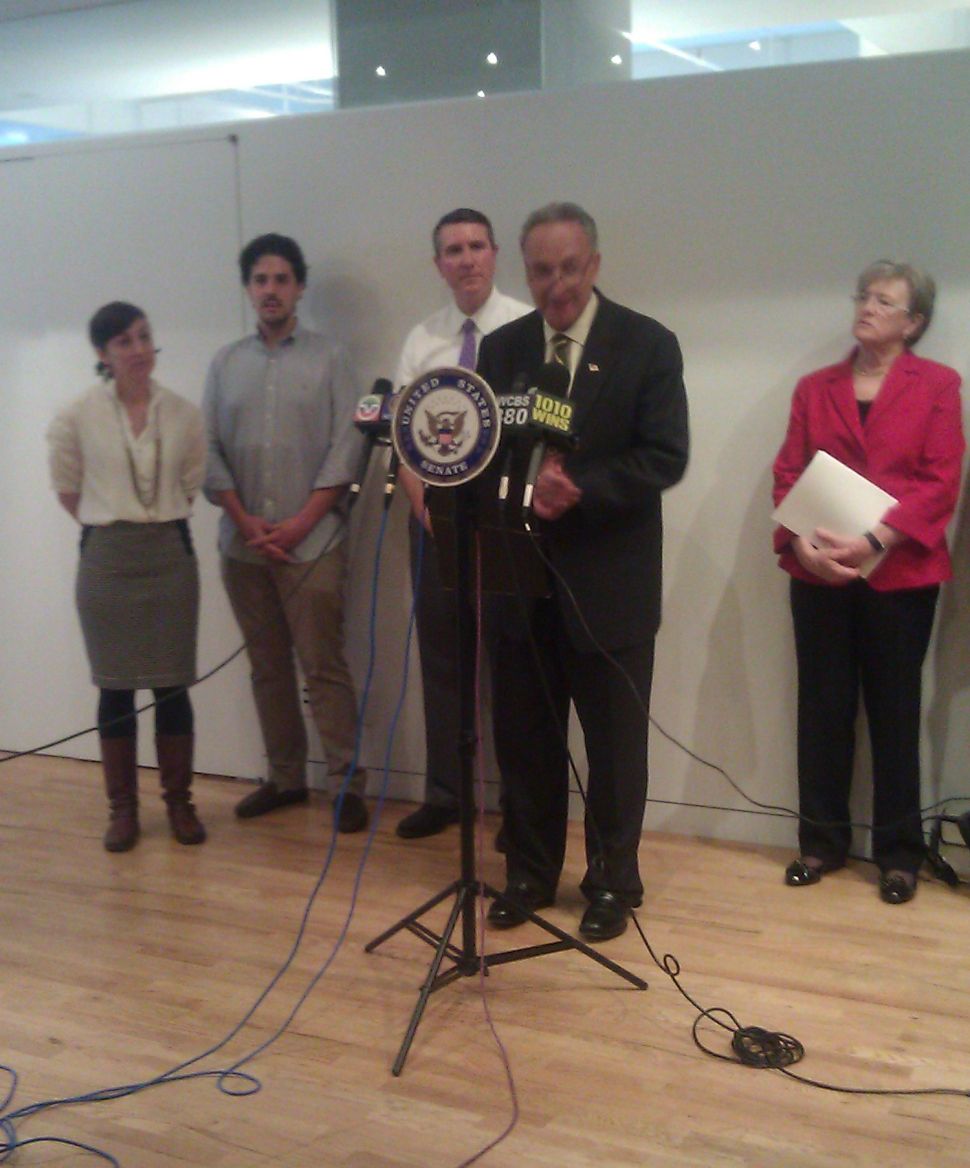