As we reported over at BetaBeat, awesome hipster scientist Nikola Tesla might soon be getting the recognition he deserves with a museum located at his old Long Island laboratory, Wardenclyffe Towers. This is all thanks to a joint web fundraising campaign from TheOatmeal.com’s Matthew Inman and the nonprofit Tesla Science Center at Wardenclyffe, which raised over a million dollars for the project in just 10 days.

But the fight’s not over yet.

“Our goal of $850,000 was set because we have a reimbursement grant for that amount from New York State,” TSCW’s President Jane Alcorn told The Observer. “If we could raise that amount of money, then at least we’d be reimbursed for that once we spent it. But that wasn’t to be the end of our fundraising … that was us just being hopeful that we could raise that much money.”

Now they have to wait and see what price current owners will accept to sell the property. “Their asking price is $1.6 million, but we hope to be able to negotiate,” Ms. Alcorn said. Even if they are able to purchase Wardenclyffe, money will have to be raised for restorations before the property can pass safety inspections.

TSCaW’s goal is to acquire the property to create a science and education center, as well as a standing memorial to the man himself. This will include the actual Tesla museum in the original laboratory, which the nonprofit hopes to restore as much as possible. The buildings adjacent to the tower would be turned into a lecture hall, classrooms, an interactive learning center, a hacker/maker space and, most excitingly, a venue for robotics competitions. “Tesla, as you know, was the father of robotics and remote controls,” Ms. Alcorn proudly informed us.

“Can you imagine kids making LEGO robots, or holding intel competitions or science fairs? Even the Girl Scouts do robotics nowadays. I’d love to see that kind of thing at Wardenclyffe.” 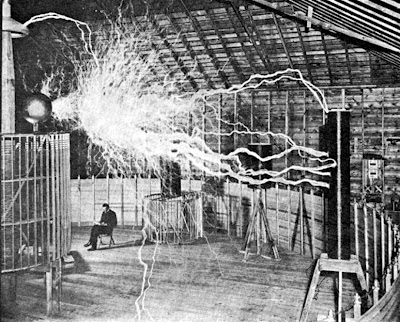