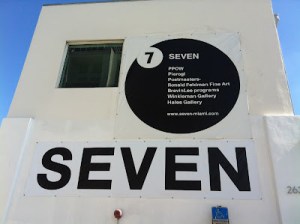 “Seven in Wynwood is definitely on the map,” said Magda Sawon of Postmasters Gallery to Gallerist, confirming that the mini art fair involving just seven galleries is indeed happening this year during Art Basel Miami Beach.

The usual suspects will be in tow, namely Postmasters Gallery, Pierogi Gallery, Hales Gallery, Ronald Feldman Fine Arts, BravinLee Programs, P.P.O.W. and Winkleman Gallery, returning to Miami for the third iteration of the fair, which, with its do-it-yourself vibe, is a mellow and manageable counterpoint to the Art Basel circus—just in size, that is. We expect the art will turn some heads, as it did last year with such works as Eat Me, Damien (2010), British-Israeli artist Yishay Garbasz’s contribution, a $1.2 million jar of preserved testicles.

While Seven will retain its pop-up feel, the galleries are still in negotiations for a site, which will be in a “big building” located in the Wynwood neighborhood of Miami. And to sweeten the deal for fair-goers, Seven organizers are also considering inviting some special, non-gallery, guests for the fair. Pray tell!