Backpage.com may be gone, but sex ads are here to stay at the alt weeklies formerly owned by Village Voice Media. Over the weekend, Village Voice Media announced it had reshuffled and separated its 13 newspapers from Backpage.com, the classifieds website with the controversial “adult” advertising section. Backpage may not be part of the newly-formed newspaper company, Voice Media Group, but that doesn’t mean its doing away with the highly profitable print sex ads.

We called back to clarify that print sex ads would remain in the pages of the company’s twelve other newspapers. Scott Tobias, the CEO of the new company, confirmed the ads will still run at all of the alt-weeklies in the chain.

“We will not be changing our business model,” he said.

Backpage’s adult ads have been linked to underage sex trafficking and prostitution leading the site to become the target of lawsuits, legislation and the ire of New York Times columnist Nick Kristof. 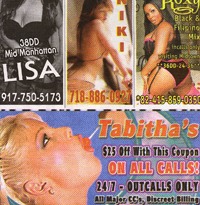