Look, we love Target as much as the next person who finds that it’s oddly comforting to walk down aisle after fluorescent-lit aisle, knowing that everything we need–from food to furniture for your college dorm to designer apparel–is all available in one location at a relatively low price. For instance, one time in college we went to Target and bought a frozen turkey, a giant bouncy ball and a B.B. gun, and then drove to a field for Target target practice. (We kept the turkey in the car and ate it later.)

So in terms of mega-chains, Target is tops, no question. We do have some question, however, about its new advertising techniques. Such as:

Part 1: Why a shoppable video? And why would a web video need a “trailer” with Kristen Bell and Will Smith’s girlfriend from The Fresh Prince of Bel-Air? And who is Zachary Abel?

Is it a web series? Can you buy stuff directly from the video by clicking on a character? Is this the future? REALLY? Don’t get us wrong, American Horror Story is great fun, and Jessica Lange deserved that Emmy, never mind the haters. But unless you want to be confused for the gimp from Pulp Fiction all night, this is the worst Halloween costume we’ve ever seen. 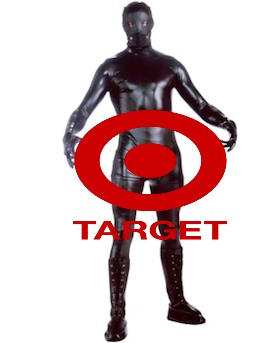