Recently, a fourth-century scrap of papyrus describing scenes from the time of Jesus was translated from the original Coptic by scholars at the Harvard Divinity School. Now, through textual analysis and state-of-the-art forensics, we reveal the complete text. (Boldface indicates words taken from the original scrap.)

I. The inheritance of land and cattle was bequeathed to my brothers, but not to me. My mother gave to me life insurance. And it was term, not even whole life. But I digress. I am here to report upon a meeting which recently took place between Jesus and his disciples.

II. The disciples said to Jesus they have noticed he’s been spending a lot of time with a woman, and wish to know if there has been a change in rules about that sort of thing. And if so, do the new rules apply to them, and how soon?

III. Jesus replied that since his Father wasn’t around, he would ask his Mother to discuss the matter. This she would not deny. Mary is worthy of it.

IV. After meeting with Mary his mother, Jesus said to them, My wife is really not my wife. I like to think of her more as a close friend, with benefits extending beyond those found in a normal friendship.

V. This did not seem to satisfy the disciples, who continued asking questions about the many closed-flap meetings Jesus had been having with this “wife who is really not my wife.” Jesus said to his disciples, “She will be able to be my disciple, which means one of you will be laid off as I really only need twelve. In fact, I was actually thinking of cutting down to ten, or even nine. Having this many disciples is very expensive.”

VI. To this the disciples reacted with little joy, pointing out they aren’t really very well paid at all, and the job is hard and has few benefits other than witnessing the occasional miracle. “Let wicked people swell up,” said Jesus, “and unionize yourselves, for all I care. I remind you that disciples are a shekel a dozen, and I can replace any of you easily.”

VII. “As for me, I dwell with her in order to save on the rent,” replied Jesus, “for it is well known that two can live as cheaply as one, even though the tent is a bit more crowded than I would normally like.”

VIII. Jesus’s words seemed to have little impact on the disciples, who grumbled loudly among themselves. One said he would display an image of Jesus’s “wife who is really not his wife” painted upon an urn by a local artist, showing her in a position “inconsistent with prayer.” 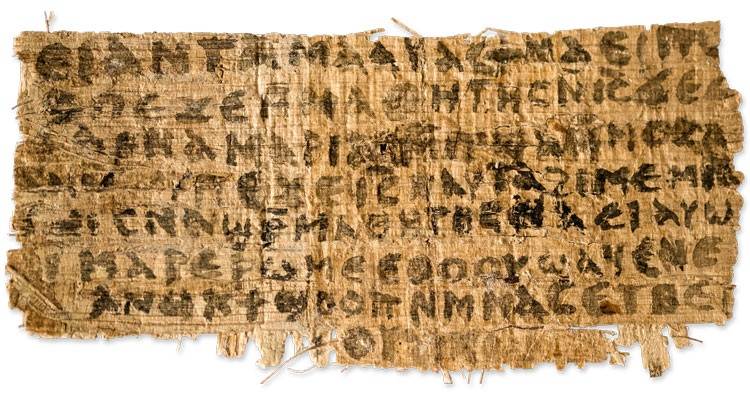