Just before noon on Sept. 24, a stream of about 200 New York Times staffers left the company’s headquarters at 620 Eighth Avenue, heading for the local hotel-workers union headquarters a few blocks north. A meeting was set for noon to inform Times union members about the status of ongoing contract negotiations and to send a message to Times publisher Arthur Sulzberger Jr.

The professions of those attending the meeting ranged from journalists to operations to ad sales. Boldfaced names included reporters Michael Barbaro, Steven Greenhouse and Richard Pérez-Peña, not to mention columnist Clyde Haberman, who has worked for the Times since 1977. The meeting was called by the Newspaper Guild of New York, which represents the Times union.

“The Times has started to move a little bit,” guild president Bill O’Meara told the crowded room. “They need to move more.”

Among the many sticking points in the contract talks are raises, pension contributions and health care. The union takes particular issue with the current health care package, saying that the company’s contribution of 6 percent of an employee’s salary is about half what companies of the same size typically pay, according to union statements.

The union’s last contract expired in March 2011, and negotiations have dragged on for a year and a half, led by Mr. O’Meara and Bernard Plum, a lawyer with Proskauer Rose who represents management. But now “the clock is ticking,” as Mr. Plum likes to say, and management has threatened to declare an impasse if a new contract is not in place by mid-November. As a practical matter, meeting that deadline means hammering out a settlement by the end of this week.

If an impasse is declared, management can impose whatever conditions it wants, and the guild has predicted that these will include a pension freeze, reduced funding for the health care plan and a longer work week. In the event of an impasse, the guild plans to appeal to the National Labor Relations Board.

As of last week, management’s latest proposal was only slightly sweeter than the first one it put on the table, and union leaders weren’t ready to settle. In an email last Thursday, the union’s mobilizing committee informed its members: “It’s time to get worried. It’s time to get organized. It’s time to fight back.”

Mr. Plum, who had previously threatened to replace the union pension with a less valuable 401K, has made minor concessions of late, such as agreeing to the union’s “adjustable pension plan.” At a negotiation meeting on Sept. 20, he eased up for the first time—offering about $7.5 million more overall, a move the union found promising but still “not enough,” according to union statements. The two parties remain about $10 million apart in their offers, a guild official told union members on Monday.

“The guild is pleased that the Times has finally made some movement in our direction,” Mr. O’Meara told The Observer in an interview last week, “and we hope we can build on it to get to a contract settlement that our members will find acceptable.”

Mr. Plum did not respond to a request for comment on the status of negotiations.

For all the talk of mobilization, as of last week, many employees were ready to accept the company’s current terms, including some of the web designers, who tend to be young and expect to change jobs in the future. The hard-liners—mostly older print journalists—are trying to win them over step by step. The first step: getting as many of the union’s 1,100 members out the door last Monday afternoon to attend a mobilization meeting. “If you only ever attend one guild meeting, make it one of these,” union organizers told colleagues last week.

At the meeting, Mr. O’Meara asked the rank and file to stage collective “actions” to help the union put pressure on management. “We are not planning a strike,” he said. “A strike is a nuclear weapon. It’s mutually assured destruction.”

Instead, he ticked off a number of stunts that might have genuine impact. He recalled as particularly effective the “silent corridor” demonstration of February 2012, when Times staffers lined the hallway outside a Page One meeting as the editors filed in. That mini-protest came after management threatened to take away the pensions for staffers in the Times’s foreign bureaus. Asked for ideas, Mr. O’Meara proposed launching a collective chant in the lobby, staging a demonstration outside the building or everyone’s favorite: bringing in the inflatable rat. “We want the rat!” said a man in the audience.

Mr. O’Meara then asked all union members to sign a letter that was posted Monday afternoon on the union’s web site, SaveOurTimes.com. Addressed to Mr. Sulzberger, executive editor Jill Abramson and incoming CEO Mark Thompson, the letter called the company’s current demands “untenable and destructive” and asked the executives to “end the era of shriveling compensation.”

Recalling that the staff took a 5 percent pay cut in 2009 and that overtime pay has fallen by half since 2008, the letter argued that the staff has given its fair share to produce ever more quality journalism for the company’s multimedia platforms.

“The news report in The New York Times, online and in print, is richer and more rewarding than ever,” according to the letter, which has no byline. “We are doing more, but making less.”

By Tuesday afternoon, the letter had 205 signatures, including those of columnists Dan Barry, Jim Dwyer and Michael Powell, national correspondents Michael Cooper, Erik Eckholm and John Schwartz, scores of reporters, and a few editors and multi-media producers.

The coming days will reveal just how much the management team will bend, and how much Times rank and file are willing to risk to achieve what they consider fair compensation and benefits.

In an email, a Times spokesperson told The Observer, “We share the frustration of our colleagues in the guild regarding the length of these negotiations and like them, we are anxious to reach an agreement. As we have said repeatedly throughout these talks, our goal is a guild contract that is fair—one that will help position The Times for future growth and success.”

Meanwhile, a Tuesday-morning meeting scheduled to last for four hours ended in 30 minutes. Mr. Plum walked out after telling union negotiators, “You’re not going to see further big movement on our part.” On the same day, the Times Company sold the job-sharing web site Indeed.com and predicted a fourth-quarter gain of $100 million, bringing its estimated cash on hand to almost $1 billion.

One of the union’s stunts was an attempt to publicize the dispute via YouTube. In a series of videos created by the union, more than a dozen Times reporters and editors discuss the hard work they do to produce quality journalism. The company, they claim, is not living up to its side of the bargain.

“We’ve already been investing in helping to save the paper, to save the website, to keep this proud organization going,” Mr. Dwyer says in one video.
“It’s time to pay us the respect that we are owed,” adds Mr. Haberman.

Several employees express fear that they might spend their old age living on food stamps and sleeping in cardboard boxes. A heartfelt plea comes from science reporter Donald G. McNeil Jr., who joined the paper as a copy boy in 1976 and now sits on the negotiation committee. In the guild interview, he asks, “Am I going to eat cat food, move in with my kids, commit suicide?”

Estimating that a frozen pension plan would deprive him of $350,000 between the ages of 65 and 85, Mr. McNeil says that prospect is “worth risking a strike over.” Colleagues credit him with creating an email list that has been the single most significant tool for union organizing this year.

While union members resist, media analysts say that cutting pensions is inevitable in the newspaper industry. The Times’s current pension commitments were made at a time when the newspaper business was in better shape and when the Ochs/Sulzberger family that controls the company was paid a regular stock dividend.

“The Times was a money machine for years, and the Sulzberger family has been very friendly to the unions,” said Edward Atorino, a media analyst at Benchmark Co.

As has been widely reported, the newspaper industry has experienced a dramatic collapse in ad revenues and circulation in recent years. According to the Newspaper Association of America, newspaper advertising spending has declined from $47.4 billion in 2005 to $20.6 billion in 2011, while online spending has increased only slightly, from $2 billion to $3.2 billion.

The Times is no exception. The company has had five straight years of declining revenue and has lost $7 billion in market value since 1999. Shareholders have gone without a dividend since 2009.

Given the current economy and the state of print advertising, “it’s imperative that all newspaper companies restructure their long-term retirement benefits or their financial future will be compromised,” said Douglas Arthur, a media analyst at Evercore Partners.

Still, some staffers see a disconnect in the numbers. While the Times reported $522 million in underfunded pension liabilities as of the end of 2011, the guild pension fund is only underfunded by about $100 million, according to a union member.

The company has acquired a mountain of cash this year by selling off assets including About.com and its remaining stake in the Boston Red Sox, and it routinely pays millions to top executives, such as the $24 million severance package recently awarded to former CEO Janet Robinson. Mr. Sulzberger’s estimated $6 million in annual compensation is the source of frequent grumbling in the newsroom.

By contrast, the union calculates that it could get most of what it is seeking for $10 million a year. In an email to members, union organizers wrote last week, “For a company that is sitting on $800 million cash, and paid its CEO more than $20 million just to go away, that is not a lot of money.” 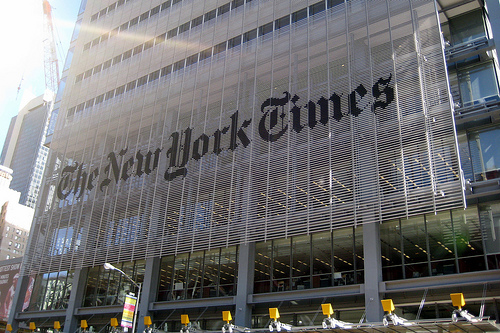