On a rainy Wednesday evening in the middle of June, Sunshine Cinemas was bright with flashing bulbs as photographers snapped pictures of a gaggle of impossibly tall, impossibly beautiful women. The angelic onslaught was not a coincidence: they were all there to see a special screening of Girl Model, a documentary by Ashley Sabin and David Redmon that was nominated for the Grand Jury Prize at the Sundance Film Festival. Girl Model follows a 13-year-old Siberian girl who wins a modeling competition and is whisked off to Tokyo, where a modeling agency has promised her fame and fortune.

The documentary paints a grim, Dickensian portrait of the unpleasant, exploitative working conditions endured by some the world’s most attractive people; the situation depicted is not at all uncommon, and the audience, made up of dozens of models—blondes, brunettes, the occasional redhead—was rapt.

After the credits, French model Rachel Blais addressed the room. Her struggles are featured in the film, and she has become a spokesperson for better treatment for fashion models, traveling to screenings and other speaking engagements. Because of her outspokenness, she noted, she is now treated like a pariah.

“I was dropped by my French agency, by my American agency … everyone dropped me after the movie came out,” Ms. Blais told the crowd. “The only reason my Canadian agency kept me on was because I appeared on TV so much they couldn’t drop me without drawing attention. But I haven’t worked in six months.”

This is the less-than-glamorous side of the modeling world, and it’s increasingly coming to mainstream attention: behind the Photoshopped editorials and heavily made-up surfaces, the industry still relies on unsafe, exploitative labor practices and a desperate workforce of scared young women.

That, anyway, is the allegation put forth by seven-month-old advocacy group the Model Alliance, which hosted the Girl Model screening. Facing down an industry mired in secrecy and reluctant to change, the Model Alliance has nonetheless won a series of small victories. As yet another fashion week gets underway, the women behind it are hopeful the group might become the “in thing” this season.

According to the Bureau of Labor Statistics, the average income for a model in America in 2010 was $32,920 a year, and though that might seem like a reasonable rate for standing around all day, consider that that is the average salary of all 1,400 registered models. The bottom 10 percent earn approximately $9.53 per hour, while the few supermodels (those that are left, anyway) skew the numbers. In 2011, the combined total of the top 10 highest-paid supermodels, according to Forbes, was just under $100 million. Almost half of that number was earned by number one on the list, Gisele Bündchen.

Of course, that figure only accounts for models who report their income properly—not those, like Girl Model’s Nadya, who have been told to lie about their age or have conditional work visas and aren’t going to be filing taxes anytime soon.

Not only is the pay meager and often late, very few employers offer models overtime. Since they are essentially freelance contractors, they aren’t provided with health insurance. Subtract out of their pay the standard 20 to 25 percent fee per gig that goes to a model’s agency, plus another 20 percent finder’s fee the agency collects from the model’s employer, as well as repayment of any advances the agency fronted, for instance, to put up young models in one of those infamously cramped ghetto colonies known as model incubators: three bunk-beds in a room, six girls in an apartment, $1,600 each for rent. Often, models end up in debt to the very people who are supposed to be making them money.

This assumes they get paid at all. In early March, 17-year-old Hailey Hasbrook complained on her Tumblr that she had worked 30 unpaid hours, some of them very late at night, in preparation for Marc Jacobs’s Fall 2012 Fashion Week show. Her post was picked up by women’s blog Jezebel, sparking outrage. Even more galling was Mr. Jacobs’s brand’s matter-of-fact response—via Twitter: “Models are paid in trade [meaning free designer clothing]. If they don’t want to work w/us, they don’t have to.”

The Council of Fashion Designers—which elected Marc Jacobs to its board five months earlier—had recently released its annual health initiative, strongly recommending that models under 16 not be hired for shows and that fittings never go past midnight. And industry guidelines aside, it is illegal under New York Labor Laws for children under 17 to work past 10 p.m. while school is in session.

Despite this flap—and in contradiction of the guidelines—Mr. Jacobs’s show included two 14-year-old models, Ondria Hardin and Thairine Garcia, who walked down the runway sporting giant, face-concealing hats and swallowed up in layers of coats and wraps. He told The New York Times, “I do the show the way I think it should be, and not the way somebody tells me it should be.”

Of course, he can say that because he knows there are plenty of young women who will accept whatever terms he sets—and never breathe a word about it. In 2004, when a class-action lawsuit was brought against 10 of the biggest fashion agencies, including Elite, Next, Wilhelmina and Ford, for price fixing, the agencies decided to settle to the tune of nearly $22 million, to be divided among “models who have or had a written or oral contract with one of the Settling Defendants.”

One problem: In the end, the court couldn’t find enough models to step forward and receive the money.

Either not enough of them knew about the lawsuit to cash in, or most of the wronged parties decided that stepping forward wasn’t worth the risk to their reputations in the industry. In the end, several million dollars went uncollected. It was donated to, among other charitable causes, Columbia Presbyterian Medical Center’s Eating Disorders Program.

That climate of fear also explains why the Model Alliance promises to protect its members’ identities while speaking on their behalf.

According to its mission statement, the Model Alliance aims to provide a “platform for models and leaders in the fashion industry to organize to radically improve the conditions under which models work.” They provide services to members who have been sexually or otherwise abused, and have teamed up with the Actors’ Equity Association and the American Guild of Musical Artists to offer a “free and discreet” reporting service to put models in touch with labor attorneys and union leaders who can advise them on workplace-related issues.

The organization’s long-term goals—put forth in a Bill of Rights—include an overhaul of the fashion industry’s labor practices: provisions for health insurance, proper immigration status, negotiable commissions, harassment-free workplaces, age-limit enforcements and clearer financial contracts for working models. The group is not a union, founder Sara Ziff is quick to point out, but an advocacy group. 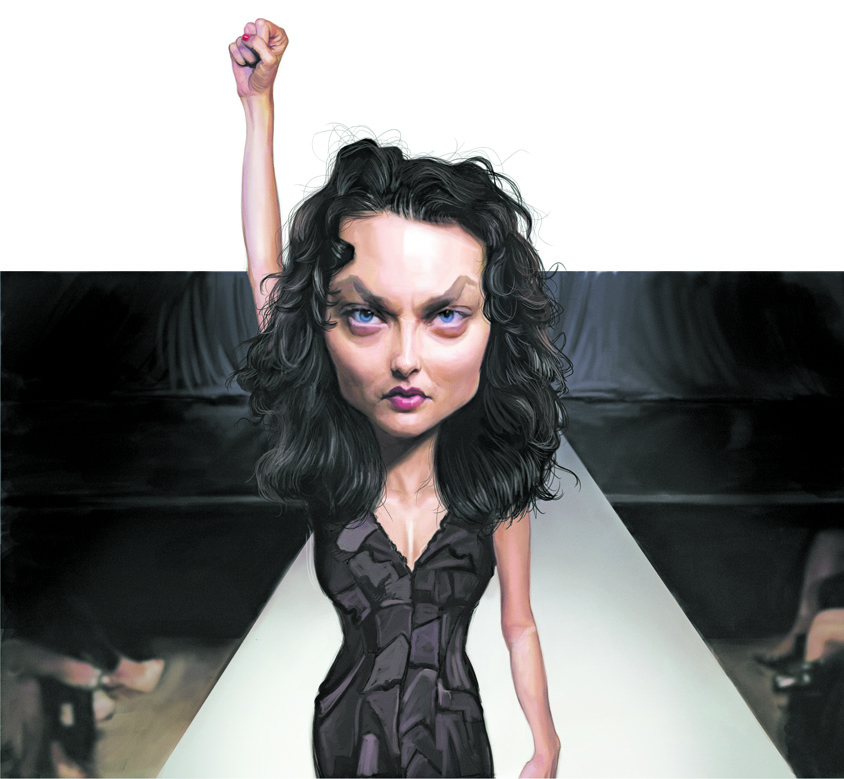