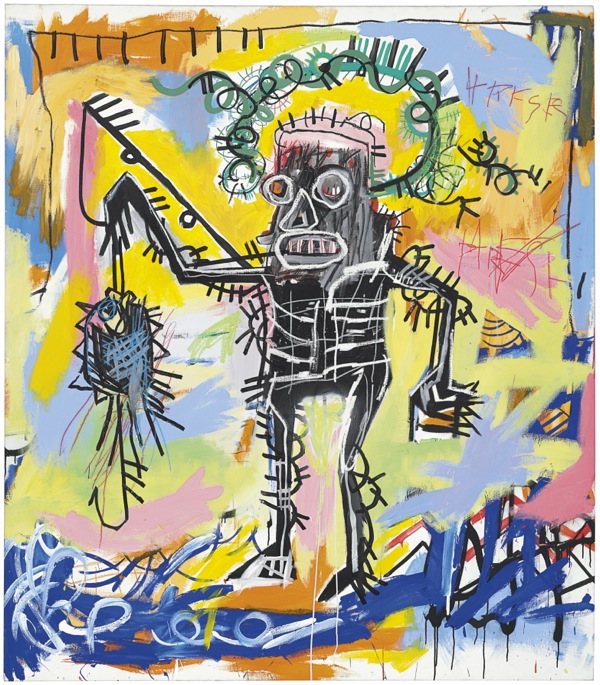 It’s been heating up for years, and now the Basquiat market is on fire, with two auction records in the past six months—$20.1 million at Christie’s in London in June and $16.3 million at Phillips de Pury & Co. in New York in May. Both were set by large paintings from 1981, when the artist was barely 20.

So it’s no surprise that another painting from that red-hot year is about to hit the block. In November Christie’s will offer a large, untitled painting depicting a fisherman; it’s estimated at around $20 million. It’s an impressive catch for Christie’s specialist Loic Gouzer, who told us he had been “tracing the work for years.” Sources say that photographer Patrick Demarchelier is the seller, though Christie’s declined to comment. A third party has guaranteed the work.

Though Basquiat is known to have done some 600 paintings before his death at 27 in 1988, collectors have tended to favor his earliest works, from around 1981 and ’82, particularly ones with figures at their center.

Basquiat made the untitled painting when he was transitioning from being a street artist to a star at Soho’s Annina Nosei gallery. “I think the best paintings were done when he was with her,” Mr. Gouzer said. “He was not suffering from the side effects of fame and money. He was a complete urban primitive. He had this energy and this rage and—in a positive way—this naïveté.”

Though the sale may eclipse that $20.1 million auction record, there are reports of some sales around that number on the private market, suggesting that demand is strong. “Basquiat is really coming into the pantheon of major American artists,” Mr. Gouzer said. “He’s going to be seen in the next five years as an icon of American art.”