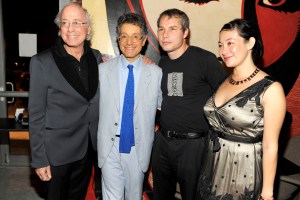 Real estate developer and art supporter Tony Goldman has died of heart failure on Tuesday at the age of 68 in New York, the Miami New Times reports. In Florida, the paper notes, Mr. Goldman was known for his work turning South Beach into a thriving tourist and nightlife destination, and making the Wynwood neighborhood in Miami a center for art and culture. Wynwood is now home to many Miami art institutions and galleries, like Gallery Diet and, to the north, the Rubell Family Collection. (Thanks to Blouin Artinfo for referring us to the article.)

In New York, Mr. Goldman was perhaps best known for operating the so-called Bowery Mural, a large wall at the northwest corner of Bowery and Houston, that has been home to artworks by artists like Keith Haring, Barry McGee, Shepard Fairey and Kenny Scharf over the past five years. The project began in 2008 in collaboration with then-dealer Jeffrey Deitch.

Here’s the New Times on how Mr. Goldman became involved with Wynwood:

In 2004, Goldman discovered the Wynwood section of Miami. Envisioning the warehouse district as an art and dining hub, much like SoHo in New York, Goldman, along with his partner/son Joey, acquired more than 25 properties in the rough-around-the-edges neighborhood.

The paper has a statement from the Goldman family, which reads in part: “To the community he touched, he was a transforming, once-in-a-lifetime figure.”