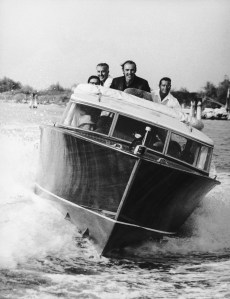 A scene from Venice in 1967. (Courtesy Keyston/Hulton Archive/Getty Images)

Documenta, which just ended its 13th edition on Sunday, has announced that its 14th edition will open in five years, on June 10, 2017. It will probably be at least a year until its artistic director is named.

All of which is to say that this is now official: 2017 will be one of the rare years that Documenta (which takes place every five years), the Venice Biennale (odd-numbered years) and Skulptur Projekte Münster (every 10 years) all take place in the same summer. It’s a total curatorial eclipse!

The last time the planets aligned this way was back in 2007, when those three exhibitions joined with Art Basel to promote the events as “the Grand Tour of the 21st century.” Which was well played on Art Basel’s part since it occurs every single year.