Walmart just sent out another cryptic release about a store it will not be opening in New York. Last time, it was an outlet at Willets Point. This time, we learn it is an even more serious non-event: the big box bogeyman’s long-sought beachhead in Brooklyn is not happening.

According to Walmart spokesman Steve Restivo, the company could not reach an agreement with The Related Companies to anchor the developer’s Gateway project in East New York. Despite this setback, the company promised to keep trying.

Walmart today announced that we were unable to agree upon economic terms for a project in East New York. We remain committed to bringing new economic development and shopping options to New York City, especially in the neighborhoods that need them most. Two things remain constant: most New Yorkers want us here and we remain interested in providing more convenient access to Walmart for local residents.

We appreciate all our supporters –the Mayor’s office, Borough President Markowitz, Reverend Youngblood and countless others in and outside East New York – who helped us strengthen local relationships and build bridges with the community. In addition to providing good jobs and  affordable groceries, residents want a retailer in Brooklyn that would hire and buy local, and look to make a positive economic impact by hosting job fairs, workforce development initiatives and supplier summits. Walmart will continue to evaluate local opportunities across all five boroughs.

That may be wishful thinking, though. The unions have fought a dogged campaign against the company for years now, dating back to Walmart’s efforts to anchor a Related project in the Bronx. Unlike Gateway, that development required City Council approval, and the elective body has shown no love for Walmart.

Which is why Walmart find itself in dire straights now. If it could not set up shop in an as-of-right development under the invitation of a favorable mayor, how will the company fair when some of its most vocal opponents are running for mayor, with one of them almost bound to get the job?

In the ultimate coup for the labor groups fighting Walmart, it is Shop Rite that will be anchoring Gateway. The grocer just happens to be a union shop. 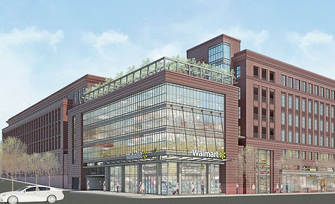