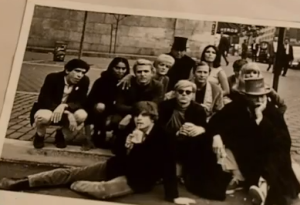 Still from video on the Time Capsule blog showing the opening of one of Warhol’s time capsules. (Courtesy the Andy Warhol Museum)

Seventeen years after the archives at the Andy Warhol Museum was opened, it has been closed for “rehousing and reorganization,” according to The Art Newspaper, which has a very interesting story on the complications with the organization and preservation of the archives of the artist who was also a notorious pack rat.

There are the films, photographs and Warhol’s “Time Capsules”—boxes of ephemera that he collected, like newspapers, bar coasters, limited edition LPs and Altoids tins. And then there are the audio recordings. Warhol carried his trusty tape recorder everywhere. The result of his obsession is that the archive now has over 4,000 of his recordings to organize. No small feat.

Museum staff agree that there are major challenges with the tape archive, but says their hands are tied: “While The Andy Warhol Foundation for the Visual Arts [the donor] has a vested interest in intellectual property rights surrounding the audio tapes, they do not maintain ownership of the materials, and the museum follows the access policy established by the donor.” Thus the tapes are not publicly available, and if you want to listen to them as a researcher you have to fly to Pittsburg: “Access is granted only to the tapes that have been duplicated and… is only in the form of listening. No note taking, transcription, quoting, or duplicating is permitted.” It is frustrating that this material cannot be freely shared. Meanwhile, the fragile tapes need to be preserved and digitised before they start to degrade. Funding is also a challenge “owing to the intellectual property concerns that limit the number of preservation funding sources that are available.”

And though the archive is set to open early next year, the cataloging will go on, it’s estimated, for at least 50 years.