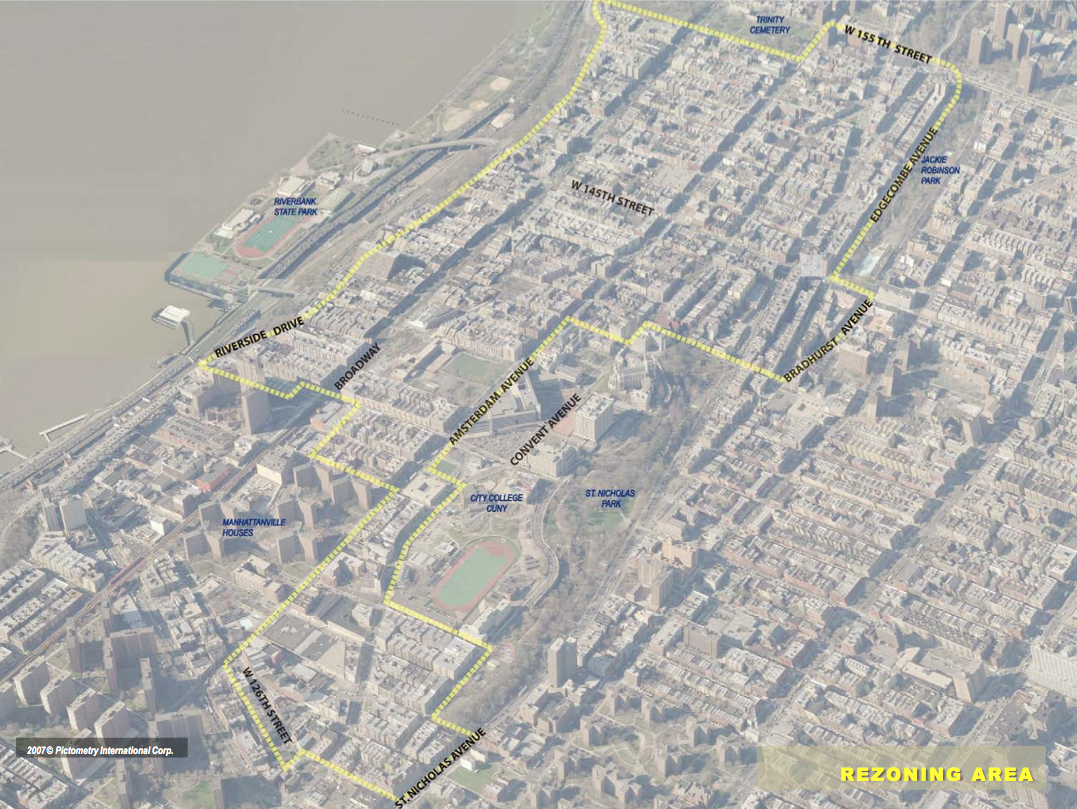 It is indeed West Harlem, a rezoning that resulted from the redevelopment of Manhattanville on the neighborhood's southern end, where a new Columbia campus is being built. The rezoning stretches from 155th Street to 135th Street with a stretch on the eastern side all the way to 125th Street, from the River to St. Nicholas Avenue. 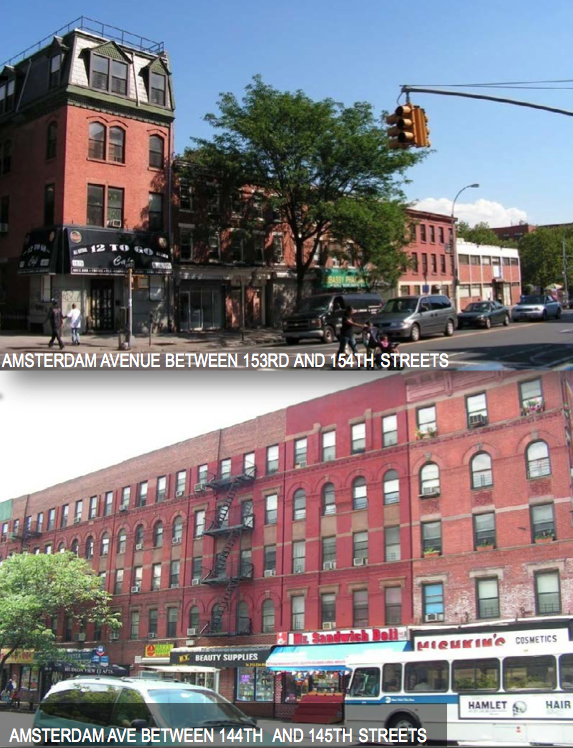 Some of the local context the rezoning seeks to protect. 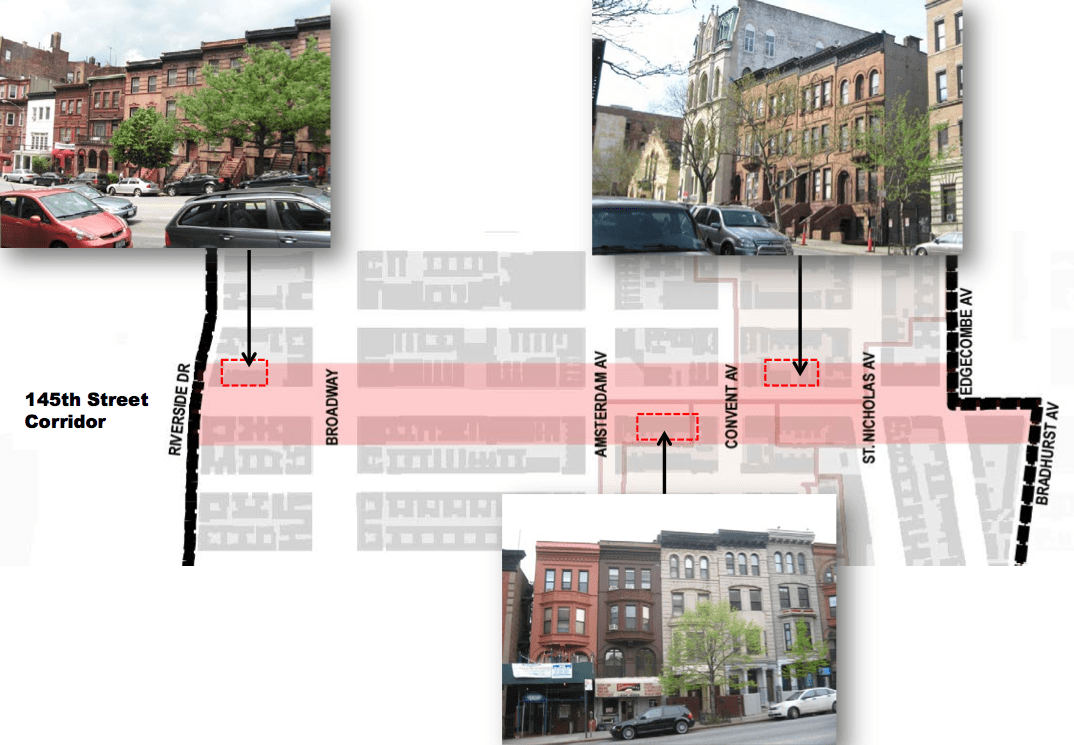 There is a range of scales along 145th Street, some small... 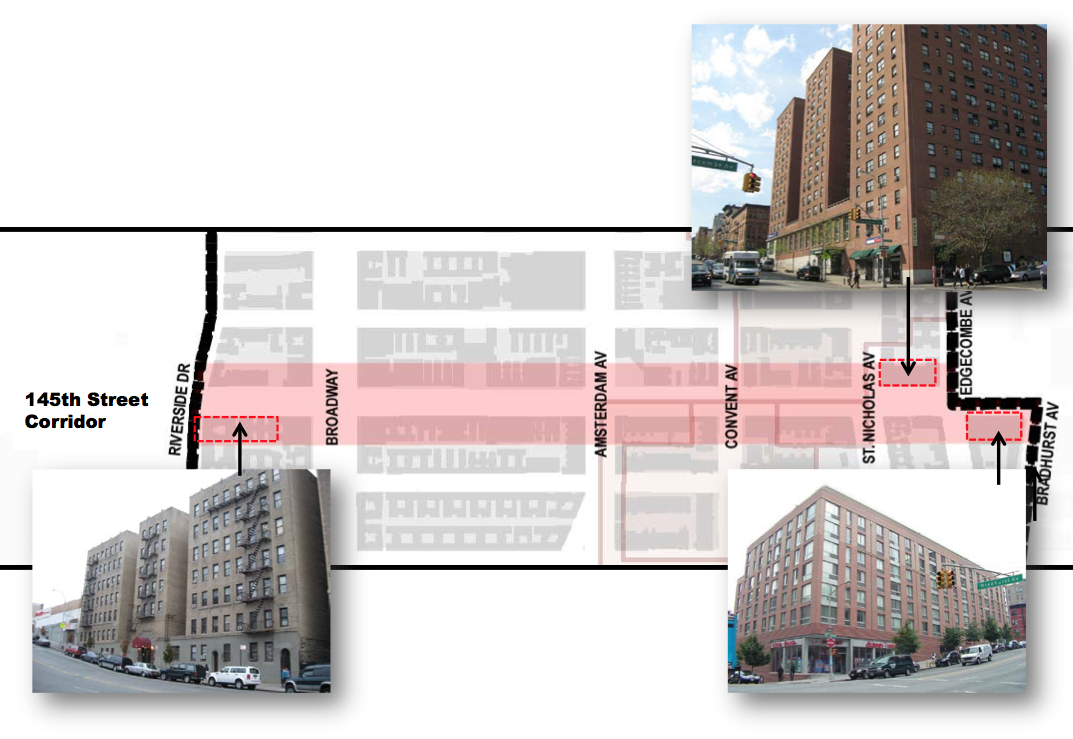 ...and some large. The plan calls for upzoning the corridor to make room for additional development.
Advertisement 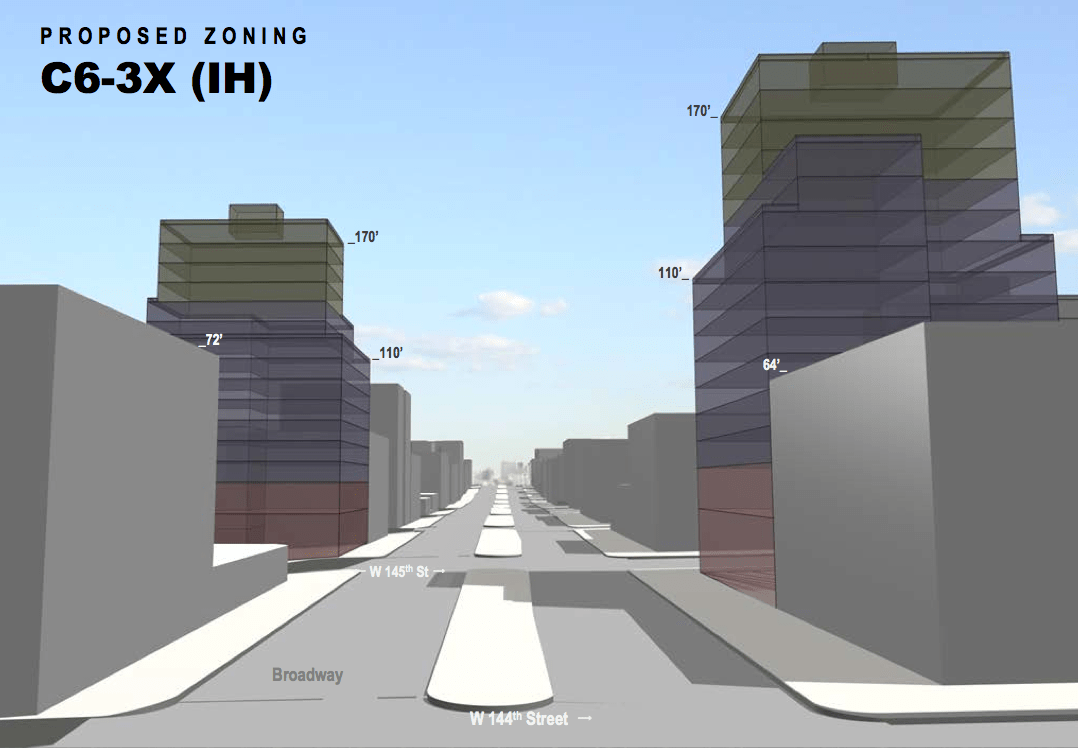 These new buildings will rise to 12 or 14 stories and hopefully make room for affordable housing inside. Some locals think they are too tall. 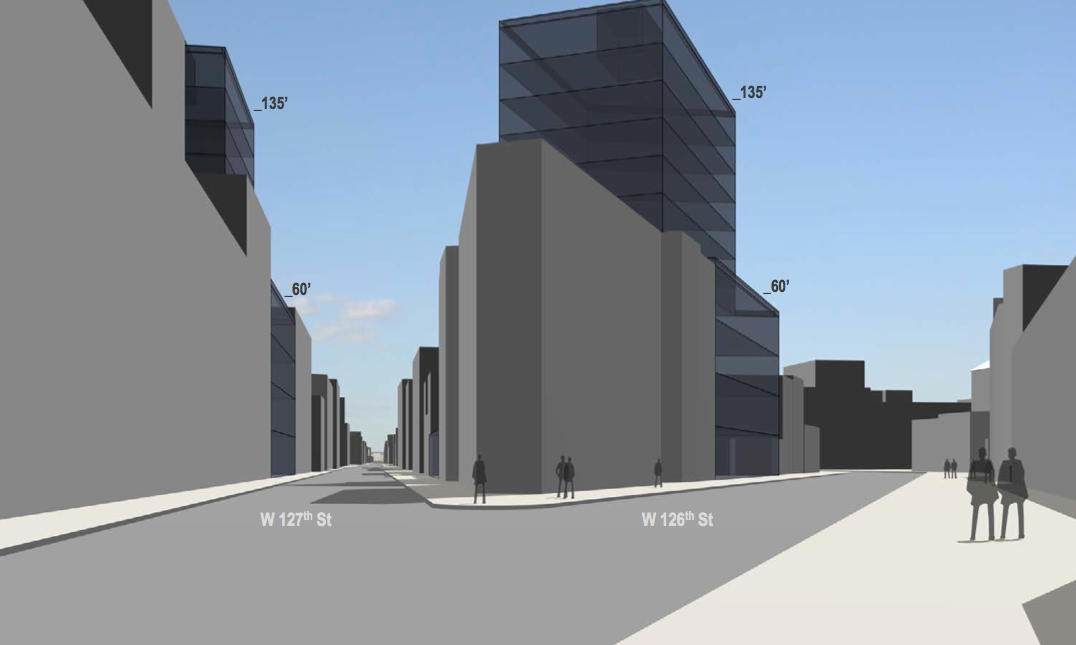 A special mixed-use district is being created near 125th Street and St. Nicholas Avenue, replacing strictly industrial buildings with commercial space for small firms and community uses with apartments on top. 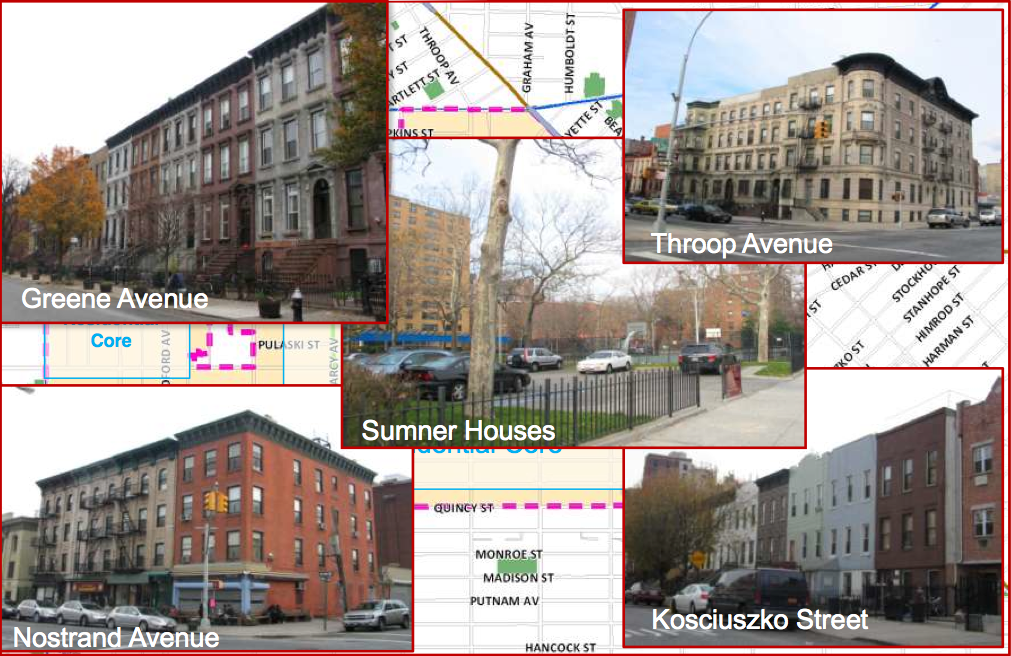 In Bedford Stuyvesant North, the character is not that different, in a way, a mix of small and medium buildings the city wants to protect.
Advertisement 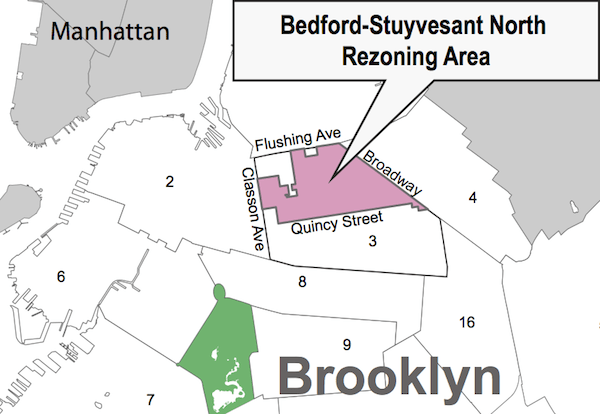 At 140 blocks, this is the larger of the two rezonings. 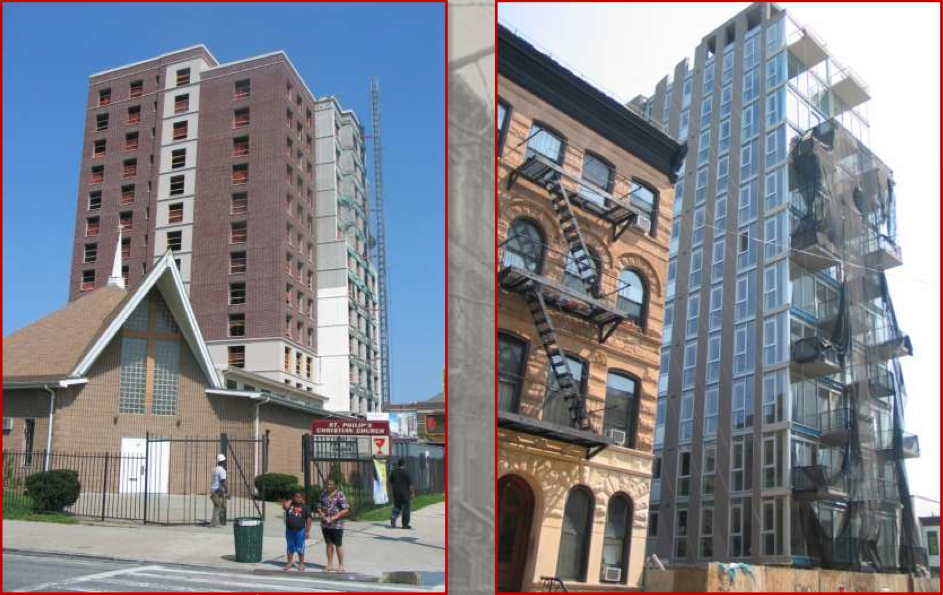 Even more so than West Harlem, Bed-Stuy has suffered from a number of out-sized towers built up and away from the streetwall/sidewalk, as has been the historical mode in the area.

Now, buildings will have to be built right up to the streetwall, and they cannot rise above 10 stories after a setback. Room for community facilities (like doctors offices and daycare centers) have been eliminated from possible uses, which developers tend to use to build taller but fill with lesser tenants. 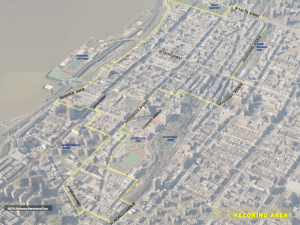 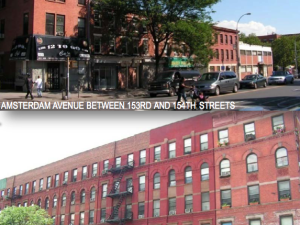 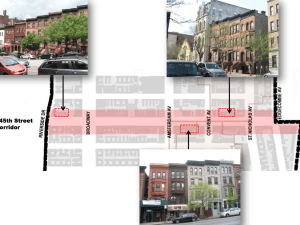 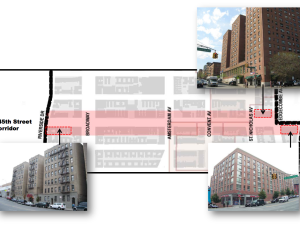 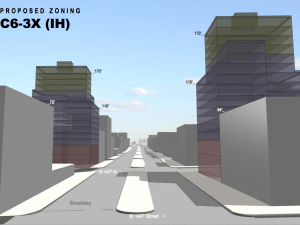 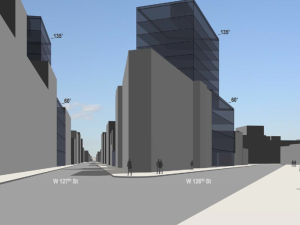 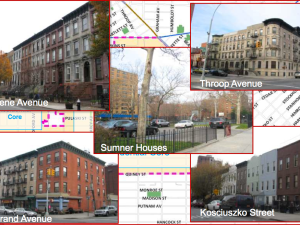 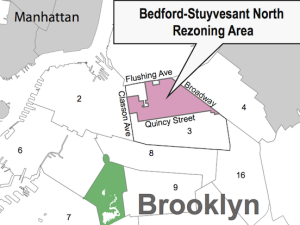 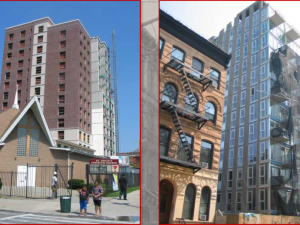 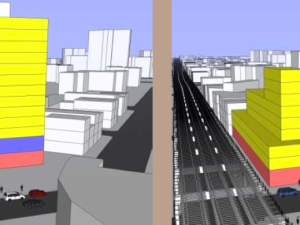 It was a busy day at the City Planning Commission Wednesday. Not only did the commissioners debate the upzoning of the Chelsea Market, which they unanimously approved, but they also approved the downzoning of two historic neighborhoods, West Harlem and Bed-Stuy. The contextual rezonings seek to limit development on side streets, which tend to be chock-full of 100-year-old brownstones, while directing new development—with affordable housing!—to the broad avenues running through the neighborhoods.

The West Harlem rezoning is an especially historic occasion since it is the culmination of more than five years of planning by the community as a direct response to Columbia’s new Manhattanville campus. Following the university’s rezoning of the 17 acres between 125th Street and 133rd Street on which its new campus is already rising, the City Planning Commission promised to do a rezoning of the 90 blocks to the north, offering protection from potential overdevelopment that could be ushered in by the new school buildings.

“West Harlem is a vibrant, diverse community, and this rezoning will preserve the scale of its beautiful Beaux Arts, Queen Anne and Romanesque Revival brownstones and apartment houses built in the first decades of the 20th century,” commission chair Amanda Burden said. “The rezoning also will reinvigorate an existing light manufacturing area just north of 125th Street by allowing commercial, community facility and residential uses in existing and new buildings to promote economic development and job creation.”

In addition to this special district, the new rezoning restricts development on the side streets to roughly four stories, while on the avenues it rises between eight and 12 stories, where an exclusionary housing bonus can allow developers to add additional development in exchange for setting aside 20 percent of their projects as affordable. While local activists liked the rezoning overall, they felt that the upzoning along 145th Street, the area’s major commercial corridor, was too high. Historic preservation is also an issue, bound up in part with the overdevelopment issues.

“The Boys and Girls Club owns P.S. 186, one of the historic schools built by Charles Snider; he built hundreds of them at the turn of the century,” said Catherine Abate, a local resident who has been active in the planning process. “Now, they could well develop it and do a 14-story residential structure, and with all that development, it’s hard to think they wouldn’t. I think the real concern for us [is] there are some important tenements, too, that with those kind of incentives, developers will have no choice but to demolish historic buildings and build bigger.”

Borough President Scott Stringer, who persuaded the Bloomberg administration to undertake the rezoning five years ago and helped plan it through his office in the subsequent period, applauded the commission’s support for the plan. “The plan reflects the input of thousands of stakeholders in West Harlem and is a model for how we can craft a community-based planning process that finds common ground and safeguards a neighborhood,” Mr. Stringer said. “It is a promise kept to the residents of West Harlem—and a proud moment for all who were involved.”

The Bedford-Stuyvesant North rezoning covers 140 blocks across much of the neighborhood from Flushing Avenue (north) to Quincy Avenue (south), Classon and Franklin avenues (west) to Broadway (east). As with West Harlem, contextualism is key, again with downzonings on down-scale streets and offsetting upzonings on the wider north-south corridors, which also provides space for new affordable housing.