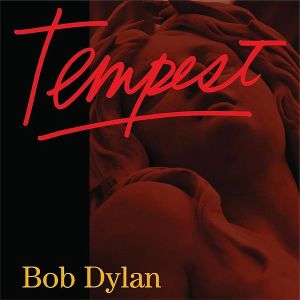 Bob Dylan’s 35th album was released this week. It’s called Tempest and its cover is really something. It shows the head of a sculpture of a woman who appears to have a look of fear or pleasure on her face. The photograph is red, and the album’s title is written over it in neon red cursive. Time was baffled: “We balked at the high school Photoshop cover art. That can’t be for real.”

It’s actually kind of awesome, in our humble opinion. It’s confident, strong and looks like it could have been made at any point in the last 30 or 40 years, and it beats the hell out of some of his recent covers, like the faux Levi’s ad that was Together Through Life‘s (2009), which used a Bruce Davidson photograph, and the Hallmark card that was Christmas in the Heart (2009). (Actually, looking at it again, Christmas is kind of great.)

Anyway, what is that sculpture on the cover? At a quick glance, it almost looks like Bernini’s Ecstasy of Saint Teresa (1647–52). Not so much. According to a report in Austria’s Der Standard, it’s a statute made by Carl Kundmann from 1898 to 1902 for a fountain in front of the Parliament building in Vienna. (Thanks to Wikipedia for the link to that article.) The fountain actually has four statues, representing the Danube, Inn, Elbe and Vltava rivers. Tempest‘s lady is the Vltava river, also know as the Moldova. Now you know!

In other Dylan news, the artist recently defended himself from charges that he has plagiarized lyrics, saying that he was appropriating, which is an important part of the folk tradition. (Some of the paintings in his show at Gagosian were also painted from existing photographs that he licensed.) The allegations, he said, have been made by “wussies and pussies.”