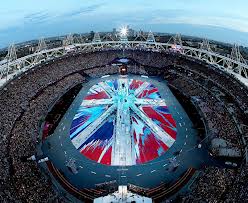 Ah, those heady days when the Olympics were on television and all those British people were doing weird things at the opening and closing ceremonies! To be young again! Fear not for the future, dear reader! Weep not for the past! Or…well, maybe fear for the future a little bit.

Two large artworks–by Damien Hirst and Marc Quinn–that appeared as part of the Olympic ceremonies have an “uncertain” fate, according to The Art Newspaper. Mr. Hirst’s gallery told The Art Newspaper that Mr. Hirst’s giant Union Jack floor piece, which was unveiled at the closing ceremony, was returned to the artist. Meanwhile, Mr. Quinn’s Alison Lapper Pregnant, which was 43-feet high and was on display at the Paralympics opening ceremony, “will not be sold,” according to Mr. Quinn.

New York dealer Ed Winkleman outlined some of the concerns:

I would think there’s not much of a market for work that large outside its original installation. Where could you ever present it again? Then again, it is Damien Hirst, so if anyone can figure out how to place it, he and his dealers would be the ones. Perhaps break it up? In the end, [the Hirst installation] was a very site-specific work, and I would think its appeal outside that context is not something easy to convince a collector of.

Now that our Olympic fever has broke, all that’s left are memories. We’ll always have London!

Filed Under: Arts, The Way We Were