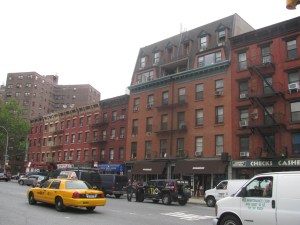 The block of Bottino and Chop Shop. (Courtesy Edenpictures)

Danny Emerman, owner of Bottino, is not tall, has a grey goatee and wears glasses with thin frames at a time when it’s much more fashionable to wear glasses with thick ones. He is by no means a schlub—he’s far too good at what he does to fall into that category—but physically he finds some common ground with the schlub, qua schlub. Not that his appearance matters, but he doesn’t necessarily look like the person who has spent the past 14 years running the art world’s favorite restaurant.

There’s the location, sure—Bottino is on 10th Avenue between 24th and 25th Streets, opposite the galleries—but this is a neighborhood where 16 restaurants have earned at least one star from The New York Times. Mr. Emerman’s main competitors for art world customers, Cookshop and the Red Cat, each have two stars; he owns three restaurants and has none. Put your clichés about the art world aside and it is still truly astounding that the menu and décor of Bottino have essentially remained unchanged since he first opened in 1998. “I mean, we do re-paint it,” he said last week, sitting in an Eames chair at his new Asian lunch spot, Chop Shop, a few doors down from Bottino. He sipped an iced tea he’d ordered. “That’s tannic,” he said with a grimace. “That’s just about the most tannic thing I’ve ever tasted. I’m going to go sweeten it.”

It’s impossible to know how many dealers, collectors, curators and artists have, over the years, held the tiny openings menu to the dim light of a candle and mulled the possibility of Grilled Norwegian Salmon, Ravioli Verdi, Grilled Baby Chicken, Pan Seared Filet Mignon or Lasagna Bolognese, and beyond that how many times they’ve eaten there on off hours. Any local bar or sandwich shop will have its devotees, the guy who suggests going there without any resignation and drums his fingers on the counter as he’s waiting, even though he’s eaten there a thousand times before. Where Bottino is concerned, everyone in the art world seems to be that guy.

“Bottino is the hub,” said James Salomon of Salomon Contemporary. “It’s the Cheers of the art world.”

“It’s the canteen,” said Jay Gorney of Mitchell-Innes and Nash.

Nicole Klagsbrun: “They get it, you know?”

“Bottino? We love, love Bottino.” said Artforum publisher Knight Landesman on the phone. “Why don’t you come down to our office? I’ll find a bunch of editors who can tell you how much they like Bottino.”

If you worked on a movie and had to design a set for the restaurant where the art world hangs out, you’d be fired if you turned in a design that looked like Bottino. There’s a glassed-in garden, and the Eames chairs also found at Chop Shop, but what you tend to remember about the interior is that it is dark, with candles, and has pale walls. What you tend to remember about the food is that it is warm, Italian and tasty, the regular menu vast. The plating does not front. Consider the art at Michael’s, the weird vodka infusions at the Russian Samovar, or Sant Ambroeus, with its mystifyingly up-to-date Italian racing forms. These are the flourishes that your Bottino did not have, this is why you were fired.

“There’s tablecloths,” Ms. Klagsbrun deadpanned when asked what she liked about the restaurant (between meals and drinks, she said she goes there about four times a week).“That’s a joke.”

Mr. Emerman estimated that they do an art world event at the restaurant five or six times a month, a rate that, like the restaurant itself, has remained consistent. Artforum always closes the place each Armory week for a big dinner. The money to start Bottino came from the dealers, who, then in Soho, had been fans of its predecessor, Tribeca’s Barocco. At the time Bottino moved to Chelsea, there was almost nothing there besides the Empire Diner, which was, well, a diner—you couldn’t take clients there. Columnist and art world gadabout Glenn O’Brien said that when Bottino opened, there was another diner across the street from it where you’d regularly see “naked transvestite hookers” at breakfast, the obvious oxymoron not even being the strangest part of that memory. If you were too loud in the Bottino garden, the neighbors would spray you with a hose over the wall. The restaurant’s initial appeal was obvious, and the place remains dominant.

Despite this, Mr. Emerman and his main partner in Bottino, Sandro Prosperi, both professed to be bad businessmen. The two were dating when they opened Barocco in 1987. Mr. Prosperi called it their child. He was the cook, Danny was the maitre d’. Since then there have been other experiments. There was Bot, the mini-Bottino, in Soho, the décor of which Mr. Emerman, with a grimace, compared to “the interior of an iMac.” There was Glass, a cool people’s club near Paul Kasmin’s space. Mr. Emerman even opened a Barocco Beach in Miami in 1991, because he’d read an article in Details magazine at the dentist’s office that said the town was hip. All these places failed.

“I like opening restaurants but I don’t really know how to manage them,” Mr. Emerman said. “I have never really had two restaurants, running concurrently, very successfully for very long,” His third restaurant, Zampa, at 14th and 8th, is “doing well, but that really has a hands-on partner, so if you get the right group … It’s very difficult. I don’t know how people do it.”

Barocco was one of those places it seems like every place used to be, pure café society. You’d have Andy Warhol, Bianca Jagger, Isabella Rosellini, Madonna. When restaurants went no-smoking, Mr. Emerman told New York magazine that he never would do that to his customers, that Isaac Mizrahi and Herbert Muschamp had offered to pay his smoking fines. Gael Greene raved and said she saw Si Newhouse there. It was where Sarah Jessica Parker and JFK Jr. had their engagement dinners.

“It was a place like the Odeon, where I could walk in there any night and I would run into people I knew,” Glenn O’Brien said. “And actually I did go out for dinner every night, basically it was either Odeon or Barocco.”

The art world moved to Chelsea in the mid-1990s because everyone in Soho had leases that expired around the same time and, thanks to a retail explosion, the rents spiked. It was frustrating. Here the dealers had created a bohemian atmosphere and were told by their landlords that their services were no longer required—that they’d have to make way for the boutiques and restaurants.

The dealer Barbara Gladstone, who moved from Soho to Chelsea in 1996, still speaks as if it happened yesterday.

“I just felt I don’t want this to happen to me again, I am going to buy something and be protected,” she said. Along with some other dealers, she bought in Chelsea, creating an anchor for what became an art district, and said she’d felt, “if I, and the rest of us, are going to put our energy into bringing a neighborhood prominence, then we should not, at least, be forced to leave.”

Ms. Gladstone had narrowed down the potential caterers to Barocco or Da Silvano, since everyone likes Italian, and she, along with Matthew Marks, the owners of Metro Pictures and a few other fans of Barocco, gave Mr. Emerman around $10,000 to start the restaurant, to be repaid in food. It was a sort of proto-Kickstarter. Ms. Gladstone even helped Mr. Emerman find the space, an old hardware store owned by an Irish family that, rumor had it, was running guns for the IRA. It was the sort of place, Mr. Emerman said, where they’d have nails but no hammers.

“It was a godsend,” he said, looking ceiling-ward. “Thank you, Barbara Gladstone, and the Irish Republican Army, for giving me that space.”

That it’s hardly changed is more to its credit than not. Look at it the way Mr. Emerman does. He keeps thinking he should decorate the take-out branch next to the restaurant, but it’s always so crowded that he can’t take the time to evaluate what he should do with it. So why bother?

“Because it was in Chelsea so early in the development of the neighborhood,” Mr. Landesman said at the Artforum offices, “it feels like home to many of us. It’s been there since before—”

“—or 85 percent of the galleries!” Mr. Landesman said. “And, yes, there are other restaurants, some of which are fine, but I think there’s a sense with most people in the art world that when they’re going to Bottino for a dinner party, or if they’re going there for lunch, there’s some sense of coming home, or being in a place that’s very sweet and familiar.”

Chop Shop is less about art, more of an earnest go at restaurateuring, offering quick bites that are light and fresh. The gallery types are sure to go, especially after someone holds an event there, but like Barocco it’s personal, developed with a former employee, Chef Jason Li. Mr. Emerman knows the cuisine—his two other partners in Bottino and Chop Shop, Simon and Mah Chan, are Asian, as is his domestic partner of the last 12 years. He’d love to have a Chop Shop on every block.

Maybe it’s not so strange that the art world likes Bottino. There’s something in its success of Flaubert’s advice to be regular and orderly in your life, so that you may be violent and original in your work. Consensus is also a major part of what the art world does—this person’s good, this person isn’t. Once an artist is embraced by the right galleries, it’s rare for his value to decrease.

Of course the art world has changed. There’s much more money, for one thing. Mr. Emerman started serving the art world because he was friends with people at Dia, or writers who ran in art circles. He hasn’t been to an opening in years. “I never cross the street,” he said.

“In the ’80s they all became incredibly glamorous to everybody,” he said. “Before that I don’t think that the art world really was.” He paid attention to everyone in it before anyone else did.

“It really felt to me like that was the pinnacle of society and culture, these artists, having David Salle and whomever in there, was just thrilling to me. Being a part of that world in some small way, and probably with, you know, revolting obsequiousness,” he chuckled, “I just think they think that I got it and the restaurant hit the right note, and that’s always been the case.”