And back they came on Friday. If Thursday night’s vigil was somber and reverent, Friday’s rally was energetic and full of rage. In addition to the sundry locals and ex-locals, protestors and hipsters and hippies there were some dressed as vampish millionaires. Billionaires for Barclays, rather than Bush. Some tropes never die. They resumed their position under the Arena’s electronic billboard inside the oculus, sponsorships still splashed across it.  The location adds an interesting Choose Your Own Adventure element to any protest staged there as ads for American Express, McDonalds, Foxwoods, and a history lesson of Barclays Bank (sans the parts about apartheid and fixing LIBOR rates and the like) stream across overhead.

It was Daniel Goldstein of Develop Don’t Destroy Brooklyn who reaffirmed the cry that the arena was just the beginning. “In this neighborhood we were told that this project was needed to stem the tide of gentrification in central Brooklyn,” he said. “This arena is a gentrifying machine.”

“In the first tower of 14 proposed and approved residential towers, of the 380 units, nine will be affordable to Brooklyn families,” he continued “That is pathetic.” (The numbers are open to interpretation. Forest City has promised to make 50 percent of the first tower affordable, but it is across a range of income bands. Those nine units are for a family of four making between $24,000 and $33,000 a year, the next 63 are reserved for families making up to $41,500, while those making up to $83,000, $116,000 and $133,000 annually each have 36 apartments per income band.)

To date Jay-Z has given three concerts in a staggering series of eight nearly back to back shows (he is taking one night off on Oct. 2, which seems a rational step for a 42 year old man) and so far they have gone off with only minor hitches and no major traffic jams.  There did seem to be an unconfirmed police ramp-up on Saturday to help control the after show crowds that poured across Atlantic Avenue, either unknowing or uncaring of the Escher like crosswalks that zig-zag across the strange intersections created by the arena and the confluence of so many major streets.

Likewise there were sporadic reports of idling limos and tour buses encroaching on the once quiet residential side streets.  A quiet, which is in all likelihood a thing of the past for this neighborhood. Then again, Park Slope is still a part of New York.

All in all, the predicted storm of Barclays—traffic emergencies, feral and inebriated crowds—did not materialize even as 19,000 people converged onto Atlantic Avenue Pacific Street Barclay Center station.

Not that Barclays didn’t find a way to reach out and perturb a greater Brooklyn by firing a not insubstantial, FAA-permit-required laser at the Prison Ship Martyrs Monument in nearby Fort Greene Park. It was a move that makes sense in it’s necessity (you can’t have a laser just shooting anywhere it pleases) but staggers in its acute cultural and historical insensitivity. It was a direct hit that was reported both by Norman Oder and the Post. “You wouldn’t want to see a laser on the Vietnam Monument in Washington,” Ruth Goldstein, founding chairwoman of the Fort Greene Park Conservancy, told the tab.

It was new new Brooklyn taking a shot at old new Brooklyn and old old Brooklyn all in one single, surprising, impressive, incipient millisecond. 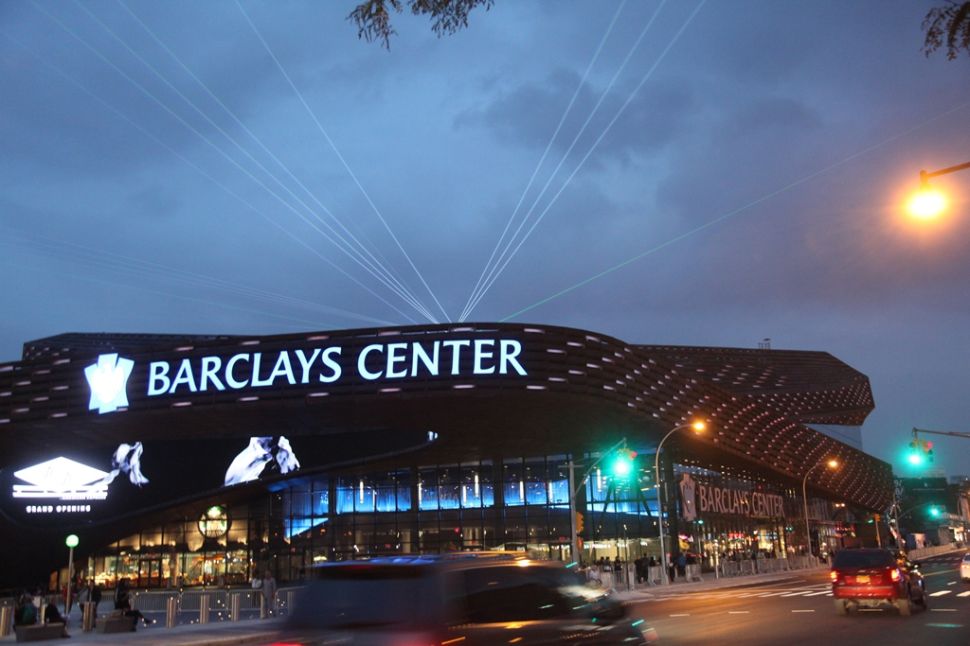