Don’t worry, it’s SFW: The Agenda Project Action Fund—you know, that fun progressive policy organization behind those very popular Granny Off the Cliff and Romney Girl videos—is back with more YouTubes! This time, it is taking on Mitt Romney and Paul Ryan’s pro-life agenda with a little something it calls “My Country, My Choice,” but could be accurately described as a “big ol’ tease.”

According to president Erica Payne:

“One of America’s two political parties has publicly stated its intention to strip women of their most basic freedom – the right to exercise dominion over their own bodies. There is no greater assault on freedom than the control of another’s physical being. The Republican Party’s official position is that they have the moral right – and should have the legal right – to physically control 51% of the population. Neanderthals believed that too. Now Neanderthals are extinct. Politicians who hold this view should be as well.”

Unfortunately, we didn’t really pay attention to what Ms. Payne was saying because we were watching the video frame by frame to see if there was a possible nip-slip. 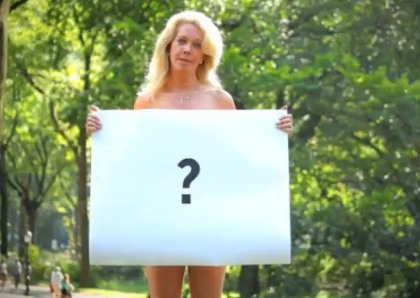