Anyone who has been paying attention to Bret Easton Ellis’ Twitter account this summer knows the American Psycho author has had his sights set on writing an adaptation of the world’s most popular book, EL James’ 50 Shades of Grey. He was already dream-casting the project to include Lindsay Lohan, or possibly Lena Dunham!

But after the news that TV scribe Kelly Marcel (Terra Nova) would be doing the 50 Shades of Grey script, Mr. Ellis went on a wee rampage against the upcoming film. For her part, Ms. Marcel is taking the high road: 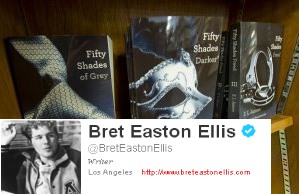