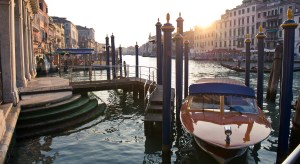 When the next Venice Biennale opens in June, the city is going to be even more crowded than it typically is at that time. Carol Vogel of The New York Times reports this evening that at least eight countries are expected to inaugurate national pavilions: the Bahamas, Bahrain, Ivory Coast, Kosovo, Kuwait, the Maldives, Nigeria and Paraguay. There could be even more! The New Museum’s deputy director Massimiliano Gioni, who’s organizing the main exhibition, told Ms. Vogel that it’s too early to say exactly how many countries will be participating.

Ms. Vogel also scored the name for Mr. Gioni’s exhibition: “The Encyclopedic Palace.” The Times has the complete story about the source of that name. For a full list of pavilions that have been announced, head over here.