Tom Tomorrow, the pseudonymous cartoonist who describes his comic strip, ‘This Modern World,’ as having run in the Village Voice “with a couple of small interruptions” since 1995 announced the paper ended its relationship with him today on his blog and in a series of expletive-laden tweets this evening.

“Unsurprising news: my cartoon just got shitcanned from the Village Voice by the assholes at corporate hq,” Mr. Tomorrow wrote.

In his blog post, Mr. Tomorrow said he has been expecting the paper to stop publishing his strip since the departure of editor-in-chief Tony Ortega last month.

“A few years back the powers that be at the Village Voice chain decided to shitcan all cartoons across the chain (costing me over a dozen major cities in a single day—it was like a nuclear first strike on my career). The one exception for me was the Village Voice itself, because editor Tony Ortega was a hardcore fan of my cartoon, and fought some serious battles to keep it in,” Mr. Tomorrow wrote. “He resigned a couple weeks ago, and I’ve been waiting for the axe to fall there, and was not remotely surprised to learn just now from the interim editor that my cartoon will no longer be running in their paper.”

The cartoonist’s departure from the iconic alt-weekly is the latest in a series of major changes at the paper and its parent company. Late last month, Village Voice Media, which purchased the Village Voice and took on its name in 2005, underwent a corporate makeover, spinning off its controversial classifieds ads site Backpage.com and transferring ownership of its 13 newspapers to a new holding company, Voice Media Group. Backpage had been the subject of intensely negative legal and political attention due to its wide array of sex ads.

Roughly two weeks prior to the restructuring, Mr. Ortega announced his departure from the paper to pursue a book project, however, multiple sources with knowledge of the situation told the Observer he was pushed from his perch at the paper by management.  The Village Voice also suffered several layoffs earlier this summer.

On Twitter, Mr. Tomorrow speculated the situation at the chain may be dire.

“Made it almost to the end of the paper’s run, which I can’t imagine is terribly far away if they can’t afford my cheap rates,” he wrote, adding, “If I had a job at village voice media, I’d sure as hell be polishing my resume. #dyingchain.”

He also had harsh words for Voice Media Group management.

“VVM has turned out to be the Bain Capital of the altweeklies. Few ppl at top made a fortune, lot of careers trampled.”

“If you’ve been considering joining Sparky’s List, this would be a good day for it,” he wrote. “This is one extremely good thing about the internet: the assholes who make these decisions can’t kill my cartoon, as long as readers are willing to support it themselves.”

Late this evening, Mr. Tomorrow claimed to have a slew of new subscribers.

“The number of people who have joined SPARKY’S LIST in response to Village Voice dropping cartoon = a hearty FUCK YOU VILLAGE VOICE MEDIA,” he wrote.

Update (11:07 p.m.): This story initially said Mr. Tomorrow had not responded to a request for comment. After tweeting with Mr. Tomorrow, we realized we had incorrectly copied his address from his site. He assures us he will give us a call tomorrow. 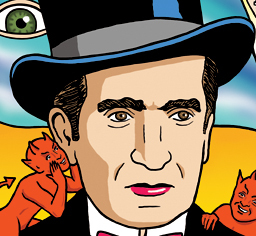