-So Honey Boo Boo has spoken: she does not like being famous. Also, she slapped Dr. Drew. Finally, someone did. Video below.


– Two of the Jolie-Pitt kids, Pax and Zahara, have been bitten by the acting bug and will be starring in the Disney film, Maleficent. Which is really weird, since they are only 8 and 7, respectively. But look, if you want to catch up with Will Smith’s brood, you have to start them early.

-It’s really cool that Lindsay Lohan took time out of her busy schedule of spiraling past her bottom to live-tweet the presidential debates.

-Turns out that hypothetical of “Would you make out with a baby Ryan Gosling” has been answered. You definitely would. 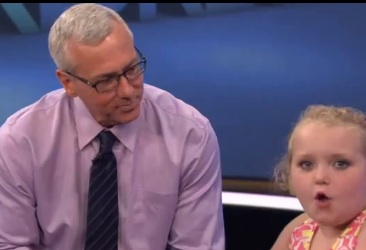