It started in promising fashion: the Republican Navy veteran with three law degrees stepping forward to run for county executive against the decrepit semi-ruins of the Hudson County Democratic Organization.

But when DeLuca claims he never again heard from Christie and received just 19% of the vote in his roadkill exercise against Hudson County Executive Tom DeGise, the failed candidate decided to change his party affiliation.

The denizen of the Jersey City Heights was done with the Hudson GOP and its chairman, former Assemblyman Jose Arango.

“We don’t have a strong organization,” said DeLuca, now running as an independent against incumbent U.S. Rep. Albio Sires (D-8). “We have a Republican in name only chairman of the Hudson County Republican Organization, and of the Jersey City GOP. Both work for Democrats. How can Jose Arango be effective when he works for (Jersey City Mayor) Jerry Healy?

“They’re totally ineffective getting anyone elected,” added the candidate for Congress.

During his run for county executive last year, DeLuca said he met the governor twice and received the “anything you need” treatment from Christie and attendant staff.

“Then they ignored me for the rest of my campaign,” he said.

As part of his independent bid against Sires, “I want the message out that I am a very serious candidate. I have spent most of my life serving and protecting my country. I have three law degrees, including one in international trade law. We are looking for serious leadership and Albio hasn’t provided it yet.”

As GOP leader in the 132,061 to 20,908 registered Democrats to registered Republicans Hudson County, Arango said he’s learned to be pragmatic – something DeLuca doesn’t get.

“I thought he was smarter than what he is,” said the Hudson County Chairman. “Look, the governor will help you if you have an opportunity to win. He didn’t see that the candidate had that opportunity. This guy is a nice human being living under the illusion that he’s living in a Republican county. I’m a Republican Party chairman, I’m not dealing with the Man of La Mancha here. I know. I was the last Republican elected to the Assembly out of Hudson County.”

Arango described as “sad” DeLuca’s attack on his employment.

“The reason I work for Jersey City is I started with (Republican Mayor) Bret Schundler, I got civil service and I became a services manager. I stayed on through the Glenn Cunningham era and into the Jerry Healy era. It’s a civil service position. Why am I going to leave when I’m doing fine? You can complain. The fact is politics is not perfect but you have to do the best you can.”

In the newly configured 8th District as he takes on Sires, DeLuca is up against roughly the same on paper registered ratio that stared him down last year: 132,061 Democrats to 20,908 Republicans – in addition to the Arango-backed GOP candidate, former Bayonne Councilwoman Maria Pineiro Karczews, as he quixotically levels a determined eye on the nearly 100,000 unaffiliated voters.

“I’ve called for some debates, I’ve tweeted to him, reached out to his office, but got no response,” DeLuca said of Sires. 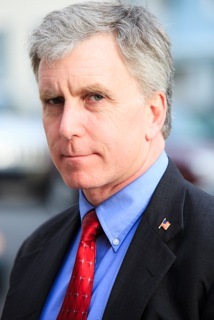