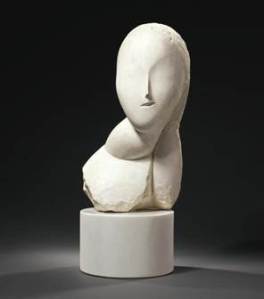 The piece in question. (Courtesy Christie’s)

Christie’s announced today that it will offer Une Muse (1912) by Constantin Brancusi, an 18-inch statue estimated to sell for between $10 and $15 million.

The full press release follows. Please note that the statue has been recreated as a hologram that will go on display in Hong Kong, while the actual work remains in New York:

New York – In keeping with increasing collector demand for exceptional examples of modernist sculpture, Christie’s New York is pleased to announce its Evening Sale of Impressionist and Modern Art on November 7 will feature Constantin Brancusi’s Une Muse — a pivotal work in plaster that was among the first sculptures by the artist ever exhibited for American audiences. Executed in 1912, Brancusi’s delicate, stylized rendering of a woman’s head drew widespread accolades from collectors and the press when it debuted at the inaugural Armory Show of 1913 in New York. Armory Show co-founder Walt Kuhn was so enamored with Une Muse that he purchased it for his own personal collection, keeping this sculpture as well as a second version in plaster for the rest of his life.

Estimated at US$10-15 million, Une Muse is among the highlights of an exceptional private collection of Modernist works that forms the core of the Impressionist & Modern Art Evening Sale this season and features important sculptures by Alberto Giacometti, Henry Moore and Jacques Lipschitz and paintings by Lyonel Feininger, Emil Nolde, and Marc Chagall, among others. Acquired in the 1980’s with a careful eye and attention to detail, the many important works featured in the sale have not been seen in public in over 25 years. With 16 works in total, the collection is expected to achieve in excess of $35 million.

As part of its international tour of highlights leading up to the November 7 auction in New York, Christie’s has recreated Brancusi’s Muse as a hologram – an innovative approach that allows collectors in Hong Kong to experience the work in three dimensions, while the plaster original stays in New York. The hologram is on public view October 5 and 6 at the Grand Hyatt Hotel in Hong Kong as part of Christie’s season preview of the major New York auctions.