The patent wars rage on in the tech world, but today a couple of big names extended olive branches in hopes of brokering a peace–or at least one between the industry and the notion of patents. This morning, leaders from the Commerce Department and Cornell University announced that there’ll be a U.S. Patent Office staffer permanently planted right on campus.

That individual will serve as a kind of liaison between the worlds of tech and intellectual property, working to connect university students and affiliates to whatever resources the Commerce Department has to offer. (Before you private sector devotees scoff, that ranges from IP strategizing to government grants.) It’s all in the service of speeding innovations from academic notion to marketable product.

This is the first time the bureau has ever devoted such attention to a particular university campus. How you like dem apples, Stanford?

“The resources we’ll provide at Cornell University’s New York City tech campus are a natural extension of the Administration’s commitment to removing the barriers that get in the way of more jobs and more innovation,” she said.

It’s all part of exploring a new model of university-led innovation, she added, “so we can push even more great American products into the global market.”

President Skorton stepped up to say that the program would allow broadening the curriculum to incorporate both academia and industry. Nor will this staffer be kept closeted in the ivory tower–everyone who spoke was very clear the initiative would be available to other schools.

Of course, one wonders how having a patent officer on the grounds of a high-profile tech campus is going to play out, given the rampant problems with patent trolls and the popularity of open source. President Skorton made pointed mention of the discussion, but also said that having a patent point person on campus will help with the process of “figuring out together the sweet spot for IP protection in the software area from trade secrets to patent protection.”

It’s also probably an indication that CornellNYC won’t limit itself to consumer Internet startups, as one doesn’t typically wade into biotech without filing some serious paperwork.

Receiving a shout out from Patent and Trademark Office director David Kappos was Stack Exchange. The two have a partnership to get third-party feedback on pending applications and share prior art, with the aim of making patents stronger and more specific. He gave props to the site for having stepped up to the plate. “We’re getting discussions going on in Stack Exchange in real time,” he said, surely blowing the minds of everyone who’s ever attempted to get a straight answer regarding a governmental application process.

Senator Schumer took the floor and first gave props to Congresswoman Carolyn B. Maloney for wearing the appropriate shade of red. “Almost like rapunzel it takes research and transforms it into jobs and companies,” he said of the tech transfer process.

He proceeded to hold up a copper pipe in one hand an iPhone in the other, to illustrate the rapid rate of innovation. Senator Schumer made the point that university founding father Ezra Cornell had held the patent on a pipe-laying machine, making it only appropriate that his should be a leader in the current technological revolution.

The Roosevelt Island Tram sure will be crowded circa 2017. 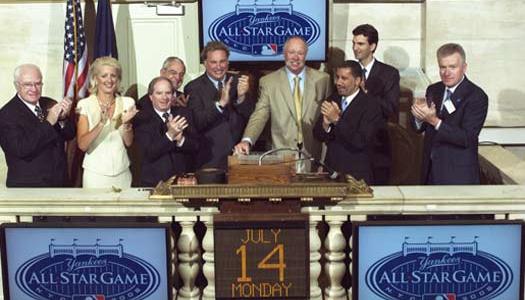