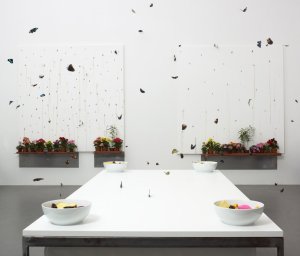 Nine thousand butterflies died as a result of Damien Hirst’s Tate retrospective, “In and Out of Love.” (Out of love, indeed.) There were two rooms filled with live butterflies in the show and, according to figures cited by the CBC, about 400 died each week.

A spokesperson for the Royal Society for the Prevention of Cruelty to Animals told the Telegraph, “There would be national outcry if the exhibition involved any other animal, such as a dog. Just because it is butterflies, that does not mean they do not deserve to be treated with kindness.”

In other news, the incident has caused many people to take to the Internet and share their opinions with strangers.