He has no interest in replacing his old boss, but that does not mean he is without ideas for those seeking to replace Mayor Bloomberg, like decking over Sunnyside Yards.
mchabanobserver 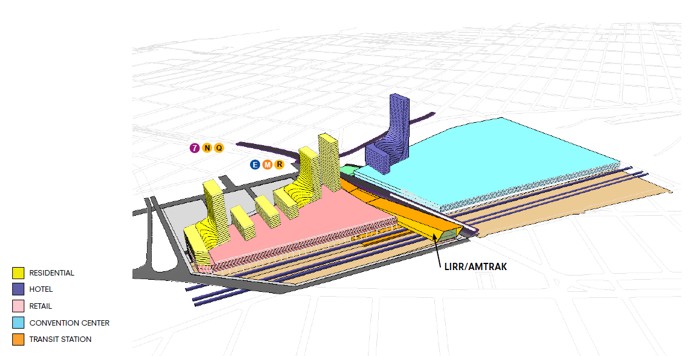 The idea Mr. Doctoroff proposed included moving the Javits Center here, and building a hotel, retail and residential towers around the site, all connected to the subway, Amtrak and LIRR.
mchabanobserver 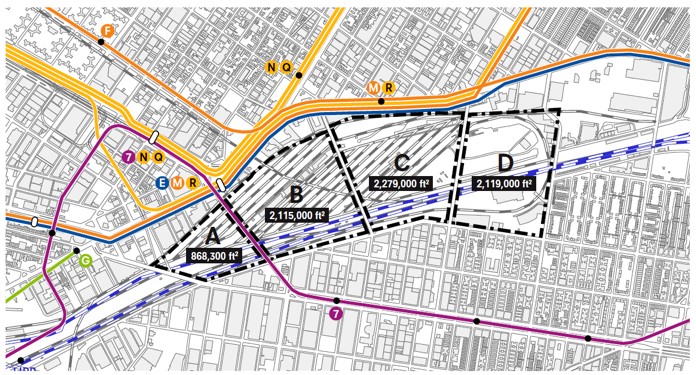 The project could be undertaken in phases.
mchabanobserver 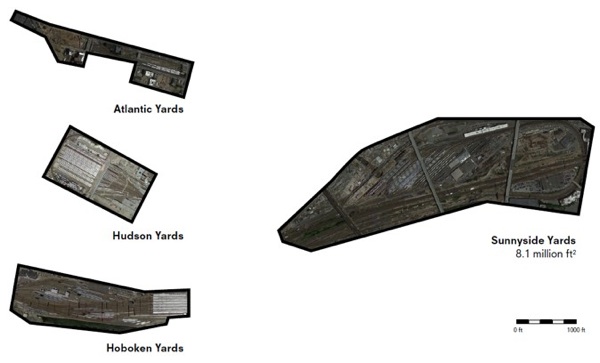 To illustrate just how massive the potential is, Mr. Doctoroff compared the Sunnyside Yards to other decking projects that have preceded it.
mchabanobserver
Advertisement 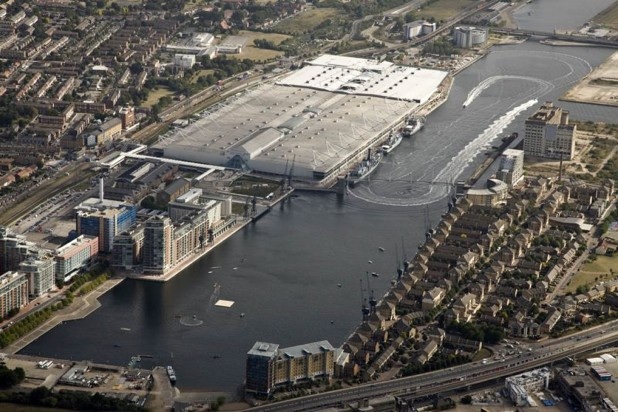 For those who say that Sunnyside is not Manhattan, and thus incompatible, Mr. Doctoroff points to London's new convention center, which is further from Central London than Sunnyside, which would only be two to three subway stops from Midtown.
mchabanobserver

In jest, Mr. Doctoroff suggested that Sunnyside could be the future hope to an Olympic stadium for 2024.
mchabanobserver 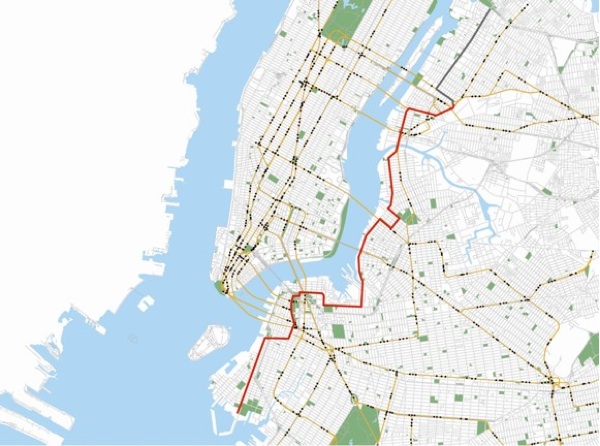 Another project he had dreamed up was creating a light rail line connecting the burgeoning waterfronts of Brooklyn and Queens, a major piece of Mr. Doctoroff's legacy.
mchabanobserver
Advertisement

This would further encourage development along the corridor, he said, and maybe it could even help fund the project from the start. Throughout his speech, connecting up the projects championed in the Bloomberg years was a central point.
mchabanobserver

To that end, he still would like to see a proposal to build a gondola connecting Lower Manhattan, Governors Island and Brooklyn.
mchabanobserver 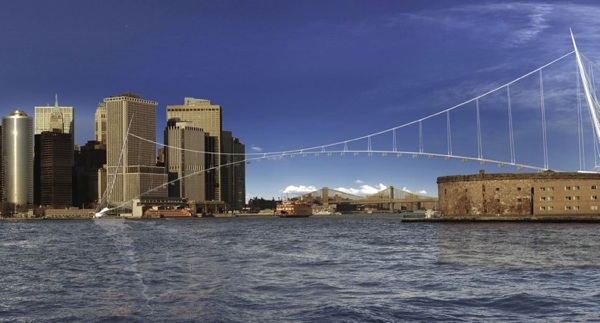 On the island, this could encourage the creation of "a hub for another emerging industry, like global health."
mchabanobserver 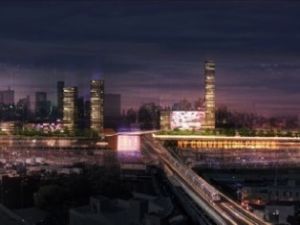 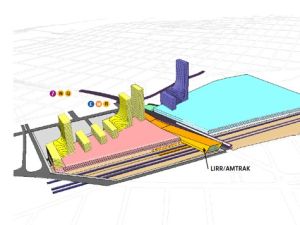 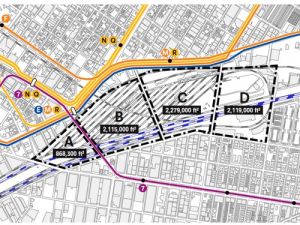 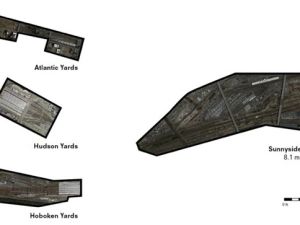 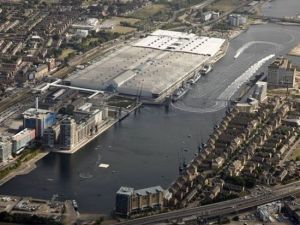 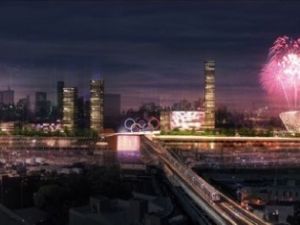 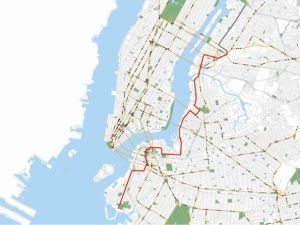 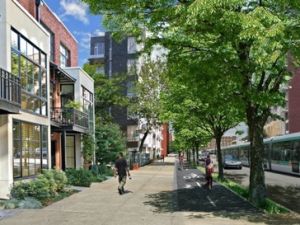 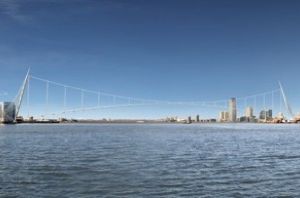 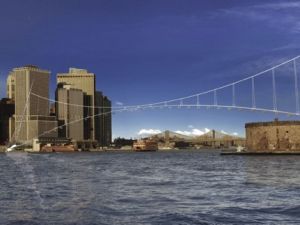 It has been five years since Dan Doctoroff reported to City Hall  for work, but the former deputy mayor and current CEO of Bloomberg LP still finds time to think up interesting, even outrageous visions for the city. Well, they would be crazy if they did not have a habit of getting built. After all, so many developments that came out of Mr. Doctoroff’s unsuccessful bid to draw the Olympics to the five boroughs have since been realized regardless, from Atlantic Yards to Hudson Yards to Hunters Point South, the No. 7 extension, taxis—the list goes on and on.

These success suggest that even though Mr. Doctoroff is no longer in command, might it still be possible to see a gondola stretch across the East River between Lower Manhattan, Governors Island and Brooklyn? Or a light rail line running the entire length of the waterfront from Astoria in Queens to Brooklyn’s Red Hook? Or, most audacious of all, tearing down the Javits convention center and moving it to yet another decked-over rail yard, this time in Sunnyside, where it would be surrounded by apartment and hotel towers and a sizable retail complex?

These were among the proposals Mr. Doctoroff put forward on Friday during a speech at the Municipal Art Society’s MAS Summit 2012. They were meant as examples for the next mayor to latch onto in order to “extend the achievements of the Bloomberg Administration by knitting new connections among emerging communities, amenities and institutions.”

Among the 90 speakers—including quite a few probable mayoral candidates—at last week’s cities conference, Mr. Doctoroff was asked to address what New York would need to do in order to succeed in the coming century. He decided to build his speech around the importance of the mayor and the priorities he believes any mayor (but especially those looking to succeed his boss) should have.

“I decided to frame it in terms of leadership because I have watched Mike Bloomberg over the past 11 years be a great leader and I do believe that mayors (for better and worse) truly make the biggest difference in the fate of the city,” Mr. Doctoroff wrote in a follow-up email. “I also believe that we can lose what we have gained quite quickly, as we saw in the 1970s.”

Mr. Doctoroff said he had three central questions that New Yorkers should ask of their would be mayors:

Of course Mr. Doctoroff himself had an answer, often lengthy, to each of these questions. To the first one, of uniqueness and global competition, he stressed that the city should not pine for the past, for legacy industries like manufacturing, for outdated ways of thinking, building and taxing. “If we begin to send signals, any signals, that we are not going to remain the most open city in the world, we will surely lose our edge,” Mr. Doctoroff said.

Mr. Doctoroff explained his “virtuous cycle” thusly: “We are a remarkably compassionate city. We believe that we need to help those in need, that we have to make the city more affordable, that we have to provide the tools for people to capitalize on opportunity. All of that requires money. That’s why our leaders have to have to truly get―and then they have to effectively manage―the virtuous cycle.”

He then, only half in jest, copped what sounded like a line from Gordon Gecko. “It starts with the core belief that growth―growth―is good,” Mr. Doctoroff said. “That the additional resident, business, or visitor generates net new revenues, which, if invested wisely, enhances the quality of life, which, in turn, helps to attract more residents, businesses and visitors, thereby perpetuating the cycle.”

This growth, this net new revenue, naturally leads to the visions Mr. Doctoroff was so famous for cooking up, and where he outlined the plans previously mentioned.

“Over the past 10 years, we have rebuilt, rezoned, and refashioned huge swaths of the city,” he declared proudly. “Rail yards are becoming New York’s next great neighborhoods. A rail line has become New York’s newest great park. A military base will become New York’s next great park. We have reclaimed our formerly decrepit waterfront for housing and recreation. Roosevelt Island will become the intellectual center of a burgeoning tech industry. We are not a city that plays small ball.”

In his email, Mr. Doctoroff explained the ideas, some new, some old, some variations on the old, were all designed to connect the progress that had come before. The gondolas would provide more reliable access to Governors Island, allowing it to become a 24/7 community, one that Mr. Doctoroff suggested would become “a hub for another emerging industry, like global health.” As for the light rail line, it would run along Kent Avenue and Vernon Boulevard, among other generally quiet waterfront thoroughfares. “Brooklyn is hot,” Mr. Doctoroff intoned. “It is Queens’ turn next.”

But the clincher was Sunnyside, demonstrating the kind of big-picture, nothing-is-impossible thinking that characterized Mr. Doctoroff’s tenure at City Hall. He called it “a huge swath or rail yards,” repeating the phrase three times, to laughter from audience, before pointing out that it “forms a scar through the middle of Queens.” Indeed, this project, bigger than Hudson, Atlantic and the Hoboken PATH yards combined, reminded people all too well of the Doctoroff days.

Proposals for such a project have been in the works for four decades, but Mr. Doctoroff brought some new innovations to the table. For starters, he believes the time is finally right to justify the massive investment such a project would entail. The starting point would be dividing the plan up into parcels, so the entire yards would not have to be decked at once but could instead be done progressively. And the timing for that first parcel could not be better, Mr. Doctoroff suggested.

“Let’s borrow an idea from Governor Cuomo and move Javits to Queens, this time, though, to a location that is one or two subway stops from Midtown,” Mr. Doctoroff explained. “You could pay for a big part of it by selling Javits’ land on the West Side, which is more valuable today because of the No. 7 extension, and we could draw a wider array of conventions to less expensive hotels in Long Island City are built.”

He pointed out that while some might complain that the location is not Manhattan, it is close enough and has its clear advantages, including space and affordablility, an approach that Mr. Doctoroff said he witnessed this summer at the London Olympics, where a new convention center had been built in a formerly industrial part of the East End.

The final slide of the presentation, a joke, Mr. Doctoroff later insisted, was the one missing piece from his legacy realized at Sunnyside Yards. “You know, it could even be the site for a temporary Olympic Stadium,” he said, to more laughs, “but I leave that to future visionaries.”

The whole affair left us feeling dizzy. Many in the city, particularly in the business class, have been hungering for a candidate who could be the successor to Mike Bloomberg. Could this be the one? The rhetoric was certainly there, as Mr. Doctoroff’s final words on stage made clear.

“Big visions like this are what have defined New York,” he said. “But they don’t happen by accident. They take guts and imagination. They require an intuitive understanding of what are New York’s unique advantages in a competitive world. They demand the skill to generate the revenues so we can afford to be the kind of city we aspire to be.”

Now who could have those qualities? Perhaps Dan Doctoroff?

“Just to be clear, I have zero interest in running for Mayor, so, if the premise of the story is that I am somehow putting myself out there, then I don’t want to engage,” Mr. Doctoroff said in response to the first email The Observer sent him asking him as much. “If it is about what I said on Friday, then I am happy to talk.”

In a follow-up email, he explained that he gave the speech because he was asked, though he also admitted to constantly be thinking up new and far-out plans for the city.

“I visit all of the leading cities of the world on a regular basis, so it is hard to avoid what they are doing and I have always been fascinated with cities anyway,” Mr. Doctoroff explained. “That said, I am quite focused on Bloomberg, so it is probably best to characterize my thoughts as musings.”

For better or worse, bigger or badder, the city could use more of these kinds of musings.