One evening in mid September, some 300 people packed into the Judson Memorial Church for a panel discussion on the rise of dance in the art world. About midway through, Ralph Lemon dropped a bomb: “I wait,” he said, “for the day when a museum acquires a dance.”

Mr. Lemon, a dancer and visual artist who prefers to be called simply a “conceptualist,” didn’t mean the sweat-stained costumes, sets and other ephemera that are often the only relics to prove that a dance has happened, but instead something far more controversial: the dance itself—the, as he put it, “performance as object.”

Dance has gained a solid foothold in the art world recently. Earlier this year, in a performance-heavy Whitney Biennial—one whole gallery was reconfigured as a dance space—Sarah Michelson became the first choreographer to win one of the art world’s highest honors, the Whitney Museum’s prestigious Bucksbaum Award, which is awarded to an artist in the Biennial and comes with a purse of $100,000.

And last week, the Museum of Modern art launched “Some Sweet Day,” a three-week dance series organized by Mr. Lemon in collaboration with MoMA associate curator Jenny Schlenzka that has three pairs of choreographers—Ms. Michelson and Deborah Hay, Steve Paxton and Jérôme Bel, and Faustin Linyekula and Dean Moss—exploring, according to MoMA’s description, “the potentials and possibilities of the museum space.” This week sees Mr. Linyekula’s What Is Black Music Anyway…/Self-Portraits and Mr. Moss and artist Laylah Ali’s Voluntaries. Next week, Ms. Michelson and Ms. Hay will perform.

The museum space isn’t exactly unexplored territory. Most contemporary art museums in New York, including MoMA, the Guggenheim and the Museum of Art and Design, now have dance series. Visual artists with no background in dance, like Elad Lassry, are using it as a new material, and avant-garde dancers are, with greater and greater frequency, collaborating with visual artists on set design. Performance artists are getting in on the game as well: two years ago, Ryan McNamara took dance lessons in public for his contribution to the quinquennial exhibition “Greater New York” at MoMA PS1.

And the modern art world has, of course, always been avidly interested in dance, from the sets Picasso made for the Ballets Russes in 1917 to the fruitful 1960s collaborations between Robert Rauschenberg and Merce Cunningham, to the experiments of Steve Paxton, Yvonne Rainer, Robert Wilson and others. The recent attraction the art world holds for dancers and choreographers is in keeping with the experimental spirit of the avant-garde, broadly speaking. “The art world invites a radical rethinking,” said RoseLee Goldberg, founder of performance art biennial Performa. “What does it say about space? What am I understanding visually? I’m asking some of the same questions that I might be asking of an artwork.”

But the question of actually collecting dance would seem to be the final frontier, one that Mr. Lemon, as he told The Observer in an email after the panel at the Judson, finds a bit vexing. The “discussion of dance in museums,” he wrote, “has to do with ‘The value of a thing.’ The economy may be our ‘new sacred’ (has been for some time!?), and if so what else is there to worship and or disrupt? A silly and yet worrisome question.”

His MoMA co-organizer echoed his concern about the rules of commerce. “[Dance] was always pushed a little to the side and not paid enough attention to, because by definition it’s something that you cannot collect,” Ms. Schlenzka said.

And yet, there is a precedent of sorts. In 2004, MoMA paid an undisclosed sum (it was said to be in the five figures) for a performance artwork called The Kiss, by Tino Sehgal, a former dancer. It consists of no more than two performers kissing and, like all of Mr. Sehgal’s performances, which now figure in the collections of over 20 major institutions worldwide, including the Guggenheim, the Tate Modern and the Deste Foundation, was sold without any physical documentation.

But dance isn’t performance art, as Jens Hoffmann, director of San Francisco’s Wattis Institute for Contemporary Art, well knows; he encouraged Mr. Sehgal to transition out of dance, and pursue an audience in the art world.

“His level of discourse was much broader than what one normally encounters in the dance world,” said Mr. Hoffmann, who was first transfixed by a performance that Mr. Sehgal did in 2001. Naked on a stage, Mr. Sehgal “re-danced” moves from famous choreographers. “I thought it was interesting that he was turning himself into a museum of dance.” Mr. Hoffmann invited him to participate in several shows in Berlin and Dusseldorf.

Mr. Sehgal, who also has a background in economics, is adamant that his work be treated like any other work of visual art—bought, sold and exhibited. To exhibit one of his pieces, an institution must follow certain contractual obligations—the piece must be shown for a minimum of six weeks, during which time it is presented all day, every day, like any other art exhibition. 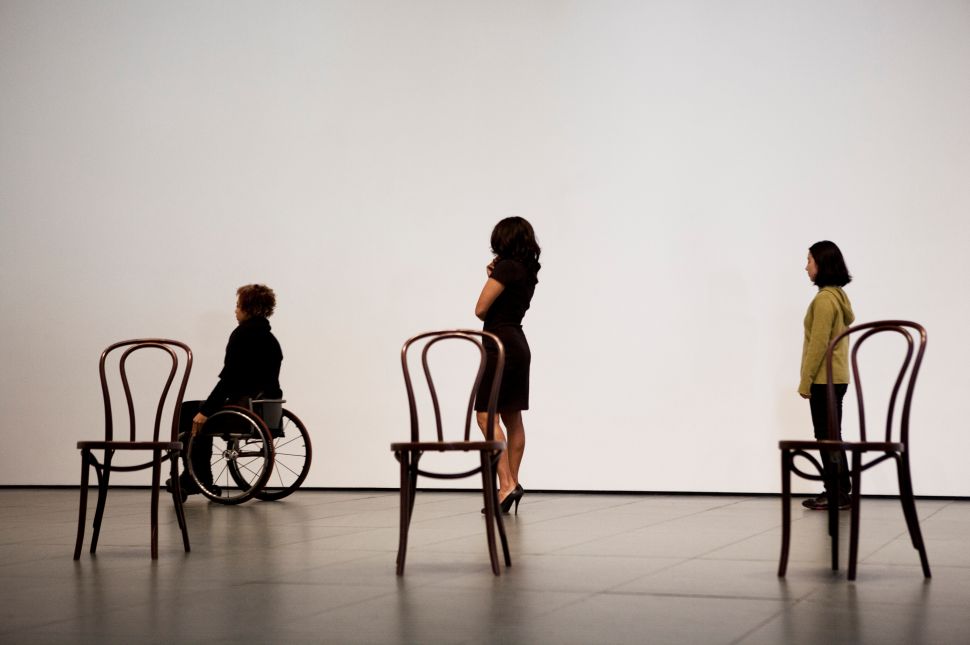