While Anderson Cooper was learning about his afternoon talk show being cancelled–no, not just for Hurricane Sandy, but forever–two late night hosts made the brave decision to continue their shows at NBC and CBS as if a giant storm wasn’t ranging outside.

The only problem? Neither Jimmy Fallon nor David Letterman had a live audience–a first, in both their histories–to laugh at their jokes. But what could have turned into that creepy David Lynch episode of Louie was actually an amazing bit of performance art as the two jokesters performed to the dead silence of a mostly-empty room. *Yanks collar* “Tough crowd!”

Late Night with Jimmy Fallon (with Seth Meyers and Robert Zemeckis as guests):

The Late Show with David Letterman (with Denzel Washington):

Is it kind of weird that both shows were promoting the movie Flight? That movie’s PR machine just won’t quit! 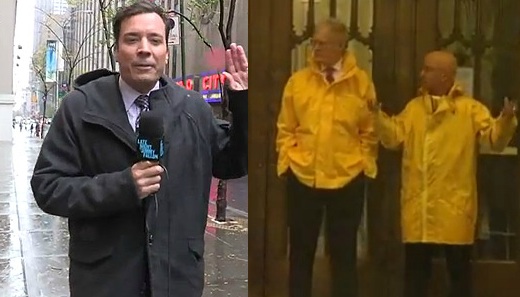