Amy Poehler and Tina Fey will be hosting the Golden Globes this year. This is a big “first,” since never before in herstory have two women been allowed to share the same stage in Hollywood, for fear they would start shredding each other’s clothes and tearing out clumps of hair.

But being on TV and being friends with Tina Fey aren’t the only two things Ms. Poehler is good at. She also gives #RealTalk lady advice to young women on her website, Smart Girls at the Party.

That is why ABC World News was impressed enough to name Ms. Poehler “Person of the Week.” It’s truly an honor, as the following video from last night’s broadcast clearly shows.

We especially like how David Wright’s three questions to the talented actress, comedian and mother are all essentially the same: 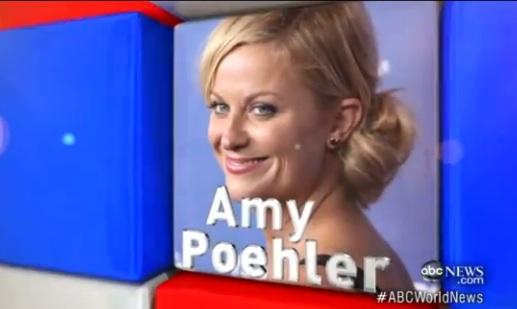