Last week, +POOL, that brilliant, crazy, possibly over-designed, possibly perfectly designed project that places a floating, self-filtering pool in the East River announced it was going to try and raise $1 million in the next six months to make its aquatic dreams come true. It is a prospect, which makes The Observer giddy with child-like joy. Swimming in the river, in river no less.

That youthful excitement is infectious, especially when talking to Dong-Ping Wong, one +POOL’s founders. “It’s a simple idea that didn’t really come from anywhere,” he explained in an interview. “As for ‘Why the idea?’ It was a combination of a few things, a hot and sweaty summer looking at the , taking the train over the , and riding my bike over the but never really seeing it at all. I’m from San Diego, we use and view very differently than we do from here.”

Not that New York should be more like SoCal—heaven forbid—but it is true that we all live on the (four out of five boroughs are on islands don’t forget) and yet so rarely do we get the chance to interact with it.

Even with the funds, building the pools is not going to be easy. After all, the Olympic-sized +POOL will have to filter more than 500,000 gallons of river a day to make it clean and safe. We wont say ‘make it swimmable’ because there are a few brave souls who take daily plunges in New York’s rivers already, but lets say, for the rest of us who still can’t shake the thought of local Superfund sites, +POOL has you covered.

The team has been working with engineers at ARUP and ecological consultants at One Nature to study the mechanical and environmental aspects of the pools filtration system, and they have learned all about enterococci and fecal coliform from professors at Columbia University. You don’t have to go much further than that to understand the stream of contaminants that +POOL is trying to eliminate.

The feasibility of designing such an intricate filtration process is just one of the many issues surrounding the project, but Mr. Wong isn’t worried. “When we first put it out there, it was three of us, and we all had similar reservations, cynicism,” said Mr. Wong. “How will it work? Will anyone care about it? I mean not every New Yorker will really want to swim in the East River. But the more we looked into it, the more it seemed that not only is the technology already there, it just hasn’t been thought of this way. I mean all the technology exists in some way or another.  In a weird way, the more we learned about it, the more the idea was right there in front of us.”

More than a few New Yorkers seem to agree with him. The project first showed up on Kickstarter last year, but now the team has launched its own campaign, and even so, it is goingly swimmingly.

“Because it’s off of Kickstarter now, the audience is different that it might have reached on that website,” Mr. Wong said. ” Kickstarter is an awesome, basically readymade community, but what’s great now is we’re also reaching a lot of people direct from the local community who we wanted to talk to anyway. In some ways the benefit of this campaign is that people are seeing it for the second time. The fact that we’re still at it, is making people maybe even more excited than we were in the beginning.  It continually re-legitimizes this project.”

It’s hard not to compare any new park idea, especially one that springs so evidently from the same architecture and design world to that high-flying and High Line or low-lying Brooklyn Bridge Park did.

“This all could be a potentially new model for how architecture can be made,” Mr. Wong said. “For us The High Line was so exciting to see happen. It started with two guys and took ten years. We feel like the pool has that kind of same potential.”

The project is spilling over into other cities as a result. Tokyo, London, Cape Town and at least a few other cities have contacted the team about getting their own +POOLs. Right now, in fact, +POOL, has a sister endeavor in Sydney with a local city rep who is shepherding the idea through it’s very early stages along the same parallel municipal and city support that +POOL went through here. It’s an idea that came from the mayor of Syndney who had early on tweeted his support of the project.

“In many ways, they’re already ahead of New York in the way that they view their waterways,” Said Mr. Wong, “But there are a some places because of industry, shipping, where they still need a lot of work to actually clean it and besides the barriers are safe to swim in from wildlife. You know, sharks and all.”

It’s not a bad piece of branding if they wanted it.  In a world full of sharks and—ahem—contaminants, +POOL remains an idea worth diving into. 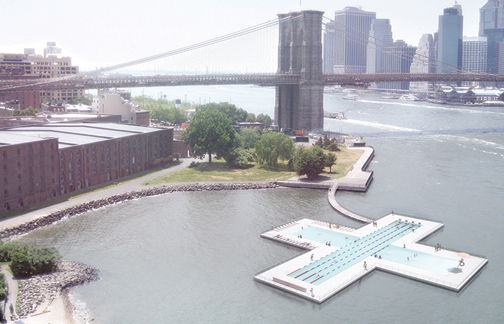