TRENTON – The number of dual elected office-holding legislators in New Jersey has dwindled to four in the four and a half years since the state legislature outlawed dual office holding, in the process grandfathering in 20 of their own.

Some voluntarily gave up their seats while others were forced to step down following criminal indictments. But, alas, four remain.

Here’s a look at what became of the 20.  The names in Bold still hold their second (and third) job.

Despite being Gov. Chris Christie’s poster boy for duel-office holding officials in the state, the triple-dipper shows little signs of giving up one of his three public positions, which pay him a combined $298,725 annual salary (not including his reported 445 unused sick days worth $331,970.) The state lawmaker, mayor and assistant school superintendent will likely be a continued talking point at Christie’s town halls.

The deputy majority leader picked up another term as Wood-Ridge’s mayor this year. Sarlo, who’s collecting nearly $5,000 a year for the seat, is slated to hold the position until the term expires in 2015.

Singer walked away from his municipal position in 2010. The unanswered question at the time was whether or not pressure from Gov. Chris Christie, who has been highly critical of dual-office holding, played a role in his decision.

The Senate president walked away from the board in 2010.

Schaer recently faced two elections in the same year and said he planned to make a decision on which to campaign for after having a look at the redistricting map. Currently, Schaer serves as the deputy speaker in the lower chamber and the council president in the city of Passaic – where he earns $26,560 a year.

Burzichelli served as mayor for 15 years and 363-and-a-half days, coming in just shy of his father’s 16-year record of being the longest serving mayor, according to the assemblyman. The nearly 16 years was enough for him, and still kept his father’s name in the record books.

The former freeholder said in 2010 he planned to walk away from one of his elected positions, but was waiting to see a redrawn legislative map before making a commitment. Assemblyman Caputo apparently ditched the freeholder seat in favor of representing District 28 in the Assembly.

Chiappone lost his council seat, a mayoral campaign, his Assembly seat, and some of his freedom in a matter of months after he was sentenced in 2010 to a year of probation for theft by deception.

Chiusano and fellow Republican Assemblyman Scott Rumana were the only two double-jobbers to voluntarily resign their second posts as soon as the law took effect, even though they were grandfathered in.

Dancer, like his district-mate Singer, opted not to run for re-election for his municipal seat.

Egan walked away from his council seat in 2010 after serving nearly two decades.

Evans stepped down from the freeholder board in 2008 after serving as freeholder director for three years.

The former Washington Township mayor vacated his municipal seat in 2008 and continues to serve in the state Assembly. Currently, the lawmaker has his hands full as he’s fighting a charge alleging he drove while intoxicated.

The deputy majority whip gave up his council seat.

Van Pelt’s double-jobbing took a hit after the former lawmaker was convicted in a bribery scheme in 2010. He was one of two assemblymen arrested as part of Operation Bid Rig.

The former double dipper lost a bid for mayor in 2008 and later gave up his Assembly seat after being indicted on corruption charges. Last year, Vas was sentenced to 6 1/2 years in federal prison. 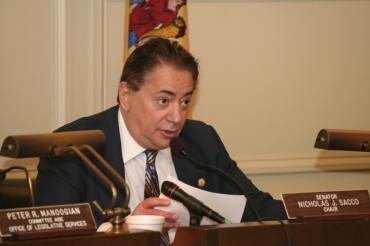