Tonight’s presidential debate was ostensibly about foreign policy, but on stage in Boca Raton, the candidates spent quite a bit of time discussing the American economy. The discussion first turned homeward when moderator Bob Schieffer asked Mitt Romney and President Barack Obama, “What is America’s role in the world?”

Mr. Romney began by saying America has the “responsibility and the privilege” to “defend freedom and promote the principles that…make the world more peaceful,” including “human rights, human dignity, free enterprise, freedom of expression, elections.”

“We recognize that there are places of conflict in the world. We want to end those conflicts to the extent humanly possible. But in order to be able to fulfill our role in the world, America must be strong. America must lead. And for that to happen, we have to strengthen our economy here at home,” Mr. Romney said. “You can’t have 23 million people struggling to get a job. You can’t have an economy that over the last three years keeps slowing down its growth rate. You can’t have kids coming out of college, half of them can’t find a job today, or a job that’s commensurate with their college degree. We have to get our economy going.”

When it was President Obama’s turn to take the question, he discussed his domestic economic plan in even more specific detail after saying one of his signature accomplishments, ending the war in Iraq, had improved America’s position both globally and locally.

“Because we ended the war in Iraq, we were able to refocus our attention on not only the terrorist threat, but also beginning a transition process in Afghanistan. It also allowed us to refocus on alliances and relationships that had been neglected for a decade. And Governor Romney, our alliances have never been stronger,” President Obama said. “But what we also have been able to do is position ourselves so we can start rebuilding America, and that’s what my plan does.”

President Obama went on to detail several elements of his economic plan.

“Making sure that we’re bringing manufacturing back to our shores so that we’re creating jobs here, as we’ve done with the auto industry, not rewarding companies that are shipping jobs overseas. Making sure that we’ve got the best education system in the world, including retraining our workers for the jobs of tomorrow,” said President Obama. “Doing everything we can to control our own energy. We’ve cut our oil imports to the lowest level in two decades because we’ve developed oil and natural gas. But we also have to develop clean energy technologies that will allow us to cut our exports in half by 2020. That’s the kind of leadership that we need to show.”

“Unfortunately, Governor Romney’s plan doesn’t do it. We’ve got to do it in a responsible way by cutting out spending we don’t need, but also asking the wealthiest to pay a little bit more. That way we can invest in the research and technology that’s always kept us at the cutting edge,” said President Obama. “Now, Governor Romney has taken a different approach throughout this campaign. Both at home and abroad, he has proposed wrong and reckless policies. He’s praised George Bush as a good economic steward and Dick Cheney as somebody who’s — who shows great wisdom and judgment. And taking us back to those kinds of strategies that got us into this mess are not the way that we are going to maintain leadership in the 21st century.”

When Mr. Schieffer gave Mr. Romney a chance to rebut, he brought up the country’s unemployment rate and promised to get America’s economy going with his five point plan.

“The president said by now we’d be a 5.4 percent unemployment. We’re 9 million jobs short of that. I will get America working again and see rising take-home pay again, and I’ll do it with five simple steps,” Mr. Romney said.

Mr. Romney described his economic plan as involving “North American energy independence,” increased trade, particularly with Latin America, “training programs that work for our workers and schools,” which put “the teachers and the kids first” and make teacher’s unions “have to go behind.” balance the budget and “champion small business.”

The pair launched into discussions of their specific disagreements with each other’s policies including their respective tax plans and President Obama’s desire to “hire more teachers.” Though the debate included substantial discussion of Libya, Syria, Israel, Iran, Afghanistan, Russia and China, this first exchange was hardly the only time the candidates kept their focus on the home front. Tonight’s debate mainly stuck to the topic at hand, foreign policy, but it still underscored just how much domestic economic questions are central to this campaign. 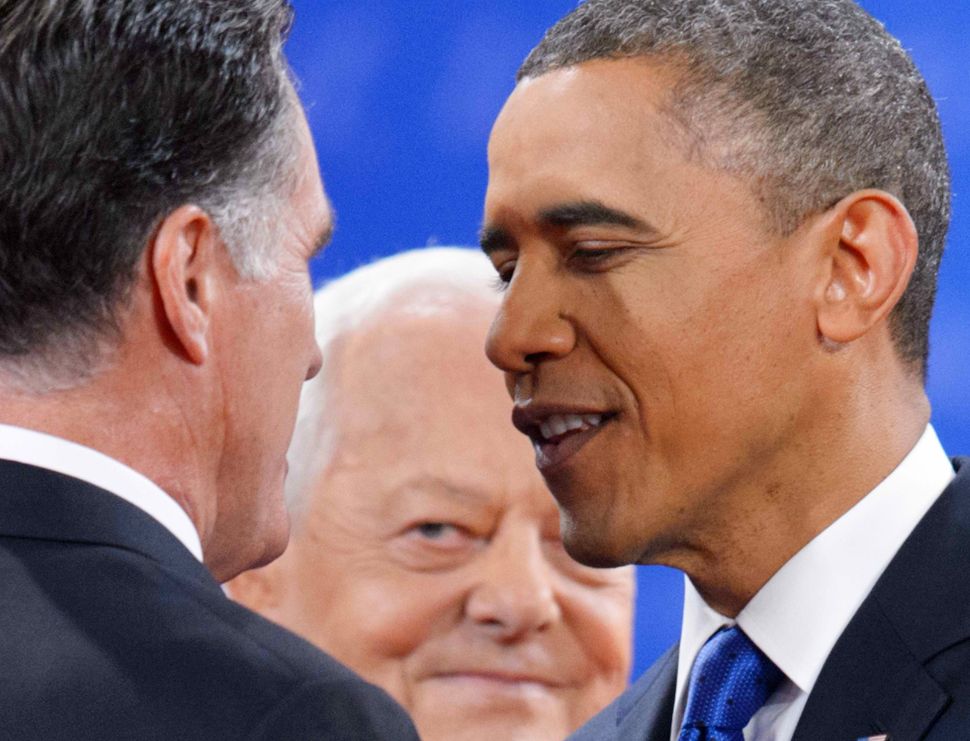