These questions regard the second season premiere of Showtime’s Homeland. Please answer the prompts with specific examples from SUNDAY’S EPISODE, though supplementary material will be accepted as a secondary source. Please write legibly. No. 2 pencils only. You have an hour to finish this test. See below for questions and sample responses.

1.  Trace the arc of Brody’s demeanor throughout this episode—pleading soon-to-be-ex-husband, shady government official, seductive spy, snarling villain. Describe each “phase” with a character equivalent from the popular TV show Doctor Who.

Instead of an arc, let’s call it a tour de force. Lewis is always amazing, but man. Drama classes should be made to repeatedly watch a clip of the flicker that comes across his face after Carrie calls him out. Right after that, he says “Turns out I’m really good at this,” and half the audience screamed out “Yes you are, Damien” (while the other half grunted “Not as good as you think, Brody”).

The fact is, this isn’t a character arc as much as a day in the life of Nicholas Brody. He embodies this range of different personas over the course of what must be less than 24 hours (yet another way in which Homeland is a less-gimmicky version of 24), and so we have to wonder: who is really the crazy one in that hotel room? How thoroughly Nazir did a number on his mind is, I think, still becoming clear.

The obvious analogy is to the Doctor Who villain The Master, who chews the scenery and kills millions of people, and then turns out to have been driven deliberately crazy by his people, who made him look into the nothingness of spacetime. Oh, and they implanted a martial drumbeat into his head that only he can hear that induces him to try to rule the world and kill everyone. Also he’s unspeakably horrible to his wife, and she’s the one who ends up killing him. On that note, it almost embarrasses me, how excited I am to see what happens when Jessica learns the truth. Will her inevitable total meltdown somehow end in her having yet another different amazing hairstyle?

As for the others: alternate-universe Pete Tyler, Margaret Blaine (aka Blon Fel-Fotch Pasameer-Day Slitheen) and, of course, Captain Jack Harkness (who would have managed to find a way to have sex with Carrie even after he realized she knew he was a terrorist).

2. We still have not learned who the mole is, but now we are introduced to another “Sherlock” (yes, I am running with this term): an analyst named Peter Quinn who looks to have his own set of brilliant quirks and immediately gets on Carrie’s nerves. Is this an attempt on the part of the writers to:
A) Present a new, healthy love interest for Carrie;
B) Present a new, unhealthy love interest for Carrie as they bond over their obsessive voyeurism;
C) Make an off-message analogy to former New York Supreme Court Justice Peter Quinn.

Quinn called Carrie crazy as soon as he met her, and now he’s seen it in action. It seems doubtful love is in the air, or the cards, for these two. As in any case when writers shoehorn a new character uncomfortably into a show, this seems to be a response to a narrative problem—and it is a hardly a romantic one.

We still have most of a season to go, and if Homeland is going to be more from here on out than us watching Brody rot in Gitmo, the best path is to have then try to turn Brody and lead them to Nazir. But there is no way now that they can let Carrie or Saul run him as a double agent. They’re way too compromised. Enter: new character with a totally clean narrative slate to fulfill any role the CIA and the writers need him to!

Also, if there really is a mole in the CIA, and its a character whose name we know, we were basically down to one person: Galvez. At least now they’ve given us two, so it’s not 100 percent obvious. (It’s totally Galvez.)

3. How is Dana and Finn’s ultimately doomed relationship like that of the two lovers in Dvorak’s Rusalka OR in Henry James’s The Golden Bowl? How are they different? (Bonus question: what kind of secret service lets the VP’s kid unlimited access to a closed-off Washington Monument when Hurricane Irene made the obelisk structurally unsound? And what if there had been terrorists at the top?)

Isn’t Rusalka just The Little Mermaid with an even unhappier ending? Dana doesn’t seem to be giving up anything on par with the sacrifice of the female leads of those stories just to be with the prince (or veep’s son). Her big trial here would just be dumping a stoner boyfriend that she is almost as bored with as the audience clearly is.

The key here is that their fathers’ politics will ultimately keep them apart, so a closer analogy would be Romeo and Juliet, and we all know how that one turns out. We’ll be needing to keep Dana away from sharp objects before the season ends. Meanwhile, as with Shakespeare’s play–a tragedy that plays out like a comedy until the very end–we can enjoy the spectacle of young love blooming. In this case, blooming while they stand gazing out of what is basically the head of a giant penis. Way to go for subtlety Finn/writers.

4. There are over 30 types of red herring fallacies. Pick the top five that relate to Saul and Quinn’s profiling of the cab driver, Roya Hammad, and the car wash guy. Extra credit if you can guess which one (besides Roya Hammad) will turn out to be an agent for Nazir.

I see through your little trick: the question itself is a red herring. They decide to follow three “brown” people, but none of the three is Hammad. The third was some graduate student who was never referred to before. Why do they decide to follow everyone but Roya? Saul was being honest: he wasn’t racial profiling, he was just profiling—picking the people most likely to be terrorists. Roya Hammad is unlikely to be a terrorist, almost as unlikely as Nicholas Brody.

It seems Saul completely overlooks her because he already knows her/knows of her and doesn’t think of her as a possible terrorist. The fact that she is a TV journalist reinforces this: being in the public eye, she is the essence of hiding in plain sight. It goes to show that the CIA has not taken Carrie’s lessons to heart. They couldn’t suspect Brody because it was too obvious, and they will keep missing what is right in front of them, chasing car wash guys and cab drivers who, we know, can’t possibly be on Nazir’s payroll.

In Homeland, the CIA is the essence of doing things in roundabout ways; Carrie will never be right for the CIA because she is straightforward. It seems shocking when she goes and tells Brody exactly what he is—and how she feels about that—until you realize that she has been doing the same thing over and over this whole time.

Carrie, in other words, is the cure to all red herrings.

5. Back to Peter Quinn: The actor playing him, Rupert Friend, is best known for his role in Pride and Prejudice as Mr. Wickham, the seemingly “good catch” (as opposed to Darcy) for Elizabeth Bennett. Using Jane Austen’s text, explain why Quinn will probably be exposed as the mole by the end of the season.

Ok, so: Wickham seems great and turns out to be evil, just like a mole. I hear you. I still think it’s Galvez.

Pride and Prejudice is your classic “marriage plot” novel: we know the protagonists are going to get together in the end, and so all the narrative interest is generated by the things keeping them apart. The “complications” of their relationship are the novel’s plot complications; without them, there would be no story. Of course, this means, ironically, that our enjoyment of such a novel is guaranteed not by the happy ending itself, but by the bumps in the road on the way to that ending—and there is no greater bump in the road for Elizabeth and Darcy than George Wickham. (Wickham is such a charming rogue in part because we can’t help but like him. Like Darcy’s pride, he’s a big part of what makes the story interesting.)

But if this episode showed us anything, it is that we have no idea where this show is really going. Marriage-plot-like templates clearly don’t work here: in any other show, Carrie and Brody’s cat/mouse game would have extended all season. That’s how shows like this work, and in that case, speculation like Quinn = mole or Quinn = Carrie love interest would have made much more sense. But that’s not what is happening here. Homeland toyed with our expectation for CIA-type shows and then pulled it out from under us. Once your forehead hits the floor that hard, it’s hard to see what’s up ahead. 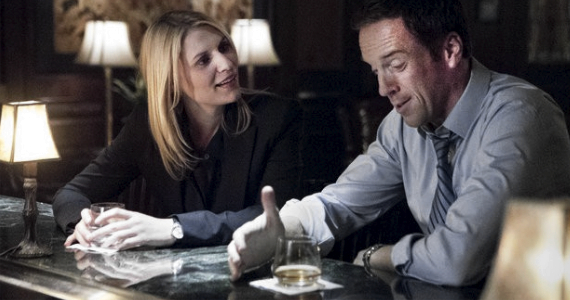