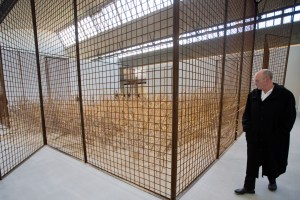 In an interview with Paris Match that hit stands this weekend, Larry Gagosian confirmed that he’s looking to open a third gallery in London, this in addition to the spaces he already has on Davies and Britannia Streets. The new space in London would be Mr. Gagosian’s 13th gallery, spread across seven countries.

This would seem to fit with a report earlier this month by Georgina Adam in the Financial Times, which said the dealer had his eye on a two-story building in Grosvenor Hill, off Berkeley Square.

The Paris Match interview is mostly about Mr. Gagosian’s newest space just outside Paris and there’s an amusing moment when the journalist, who is a bit combative throughout the whole thing, asks if Mr. Gagosian ever goes to exhibitions for fun. Only at museums, they have Mr. Gagosian say in French. In fact, he’s soon headed to Washington to see the new show on “Richard Stine.” Whoops! Seems like le journo may have experienced a little trompe l’ear. Mr. Gagosian most likely said “Roy Lichtenstein“.