PERTH AMBOY – It was a unity rally for Central Jersey Democrats but local rivals unmistakably worked the room at the same rented Ironworkers hall occupied less than a week ago by Gov. Chris Christie.

When Menendez spoke, he gave a nod around to the electeds, catching himself when he observed Wisniewski.

“I almost gave you a promotion,” said the senator. “That wouldn’t have been a good thing here.”

In this 7-1 Democratic registration advantage city, Menendez criticized Republicans for advancing an agenda he said is designed to protect the wealthy. “Their cynical approach has been to let the president fail so we can win an election,” he said. “We must use our votes to reject the politics of failure and embrace the politics of progress and prosperity.”

Alternating his speech between Spanish and English, he treated the crowd to some dance steps as salsa rhythms flooded the ironworkers’ hall.

But the local focus rippled in the paneled interior.

As Assemblyman Craig Coughlin, (D-18), the third leg of the 19th District legislative stool, scrambled onstage, the picture completed the back story to next year’s deepening intrigue: namely the fate of the 19th Legislative District and whether Vitale, Wisniewski and Coughlin will all return to the party line or whether one of them will swap out in exchange for a Latino in olive branch recognition of Perth Amboy.

No evidence of fracture emerged as everyone wore his best game face for the team.

“A wonderful assemblyman, our state chairman, who’s not afraid to take on the governor, my colleague, John Wisniewski,” Coughlin told a cheering crowd.

Wisiewski rose and went up onstage to applause.

“We have a really important choice. We have a choice about going forwards or going backwards,” the state party chairman railed, denouncing Romney/Kyrillos as the trickle-down ticket.

Mowing through handshakes on her way to the front of the room, Diaz denied reading anything especially worrisome about Delgado’s equally energetic presence.

“They’re all here,” the mayor said of her challengers.

As he prepares to vacate Perth Amboy in the aftermath of redistricting, U.S. Rep. Albio Sires, (D-8), thanked the city and welcomed his successor, U.S. Rep. Frank Pallone, (D-6), the new representative of the waterfront burgh.

“There was one person who stood up for me and supported me with courage, and that’s the mayor,” said the congressman, who sat with Vitale, Pallone and Diaz.

Wisniewski sat on the wing with Delgado nearby.

In the middle of the crowded room could be seen Frank Salado, who’s also running for mayor. 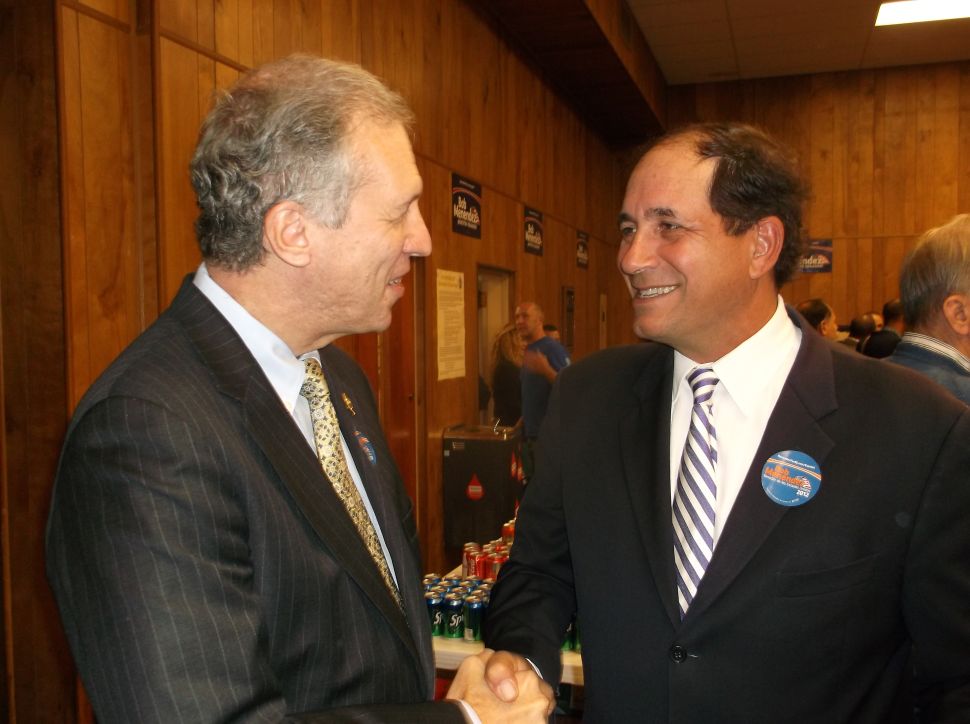