Former Republican New York Governor George Pataki was one of the surrogates backing Mitt Romney on “spin alley” after last night’s presidential debate at Hofstra. Politicker used the opportunity to ask Mr. Pataki which GOP candidates he thought might emerge to challenger the crowded field of Democrats who are likely to run for mayor in next year’s election. So far two political newcomers, Manhattan Media CEO Tom Allon and Doe Fund boss George McDonald, are the only ones who have declared their intentions to run on the Republican line, but Mr. Pataki indicated there may be other Republicans mulling a mayoral bid.

“There are a number of people who are talking about running,” said Mr. Pataki. “I’m hopeful that we’ll have a strong candidate.”

Mr. Pataki went on to explain he believes it’s in the best interests of the public in any election for there to be strong candidates from both major parties.

“I’m a great believer in the two-party system. I think government works best when, even if there’s a dominant party, that it’s held accountable,” the ex-governor said. “I fear in New York too often we have one-party politics. And it doesn’t work when it’s Democrats in New York City or in the state, it doesn’t work if it’s Republicans some place else. The checks and balances of vigorous debate, like we had tonight, are what serve the people the best.”

Since Mr. Pataki hinted there may be other Republicans with their eye on the race waiting in the wings, we asked whether he was aware of any potential candidates he might be willing to endorse.

“There are some. There are some,” said Mr. Pataki. “Sure, no one has formally decided they’re going to run, but a number of people are looking at it and talking about it, and I hope we do get some very good candidates in there.”

Based on Mr. Pataki’s apparent awareness of potential Republican mayoral candidates who haven’t made their interest in the race public, we asked whether he was communicating with them directly.

“They’re talking to people who are associated with me; some have talked to me directly,” said Mr. Pataki, coyly.

Potential Republican mayoral candidates wasn’t the only subject we discussed with Mr. Pataki after the debates. While the surrogates were doing their thing in “spin alley,” the Yankees were finishing up their ALCS loss to the Detroit Tigers. Before speaking to us, Mr. Pataki was asked by another reporter if he was aware of the outcome in the game, which had just concluded.

With a heavy heart, we volunteered that the Yankees had lost.

We informed him that Mr. Verlander stayed on until the ninth inning when he gave up a home run to Yankees shortstop Eduardo Nunez.

After being told the Tigers won 2-1, Mr. Pataki shook his head. 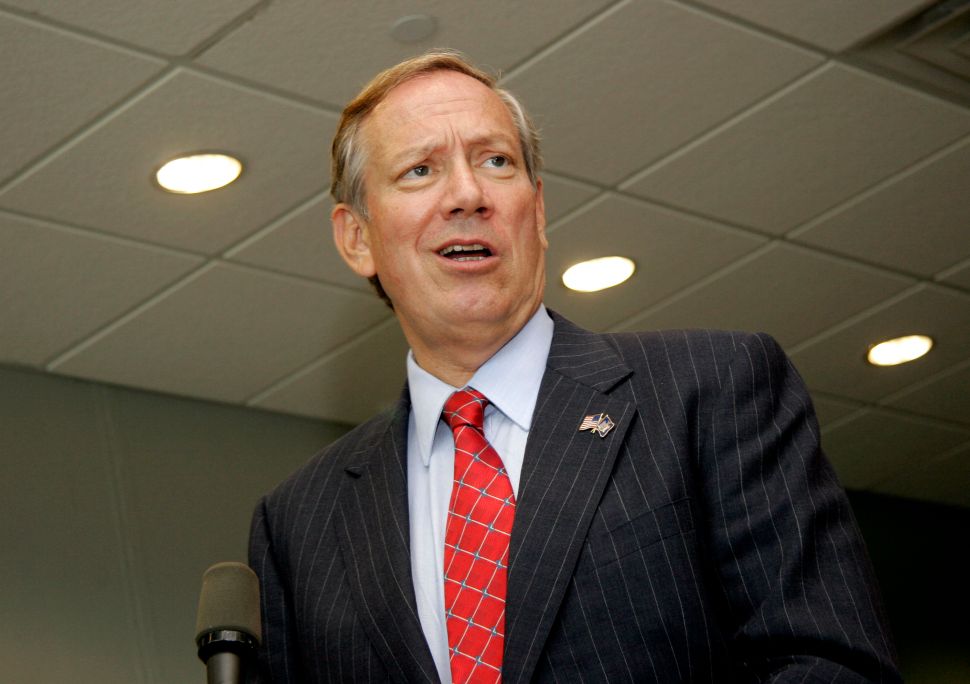