The deferential approach may lead to plenty of commissions, but the awards, the press, the plaudits are less forthcoming. When The Observer mentioned the firm to one of the city’s mid-career hotshot designers, he responded, “Who?” We explained the Kondylis connection. “Oh, those guys. That stuff is just the worst.” In a word, boring.

But their clients do not see it that way. “Most architects, frankly, are assholes,” one developer said. “They couldn’t make your life more difficult. That is why we work with Goldstein Hill & West whenever we can.”

Even developers who have worked both sides of the field, like Mr. Silverstein or Izak Senbahar, president of Alexico Group, appreciate the Goldstein, Hill & West approach. Mr. Senbahar employed Richard Meier to build a third Perry Street-style tower at 165 Charles Street and hired French designer Jacque Grange for the Mark Hotel. But more often than not, he has worked with Mr. West on his residential buildings, including the Grand Beekman, the Elektra and the Laurel.

“They’re a developer’s architect, as we call them,” Mr. Senbahar said. “They understand it’s difficult to building in Manhattan, there are serious money concerns and they are very proactive.” Mr. Senbahar even tapped the firm to help Herzog & de Meuron make their ambitious 57-story Tribeca tower work.

It is perhaps the perfect revenge for designers who have been ignored by the public that they are now playing savior to the starchitects, called in by developers to fix their long-suffering projects.

At 200 Chambers, Lord Norman Foster grew weary of pressure from the community board, so Mr. Hill was brought in to finish the condo for the Resnick family. Should Bruce Ratner decide to ditch modular construction at Atlantic Yards, SHoP will still design the façade, but the interiors will be Goldstein, Hill & West’s. That is already the case at Herzog & de Meuron’s 56 Leonard Street.

And in perhaps the firm’s greatest coup, the city’s biggest and grandest, apartment tower (for the moment), One57, is also a Goldstein, Hill & West production, according to two separate sources. French Pritzker Prize winner Christian de Portzamparc had been working on the building, but like so many other developers, Mr. Barnett turned the designs over to Mr. Hill to make them work.

When Kondylis & Partners dissolved, Mr. Barnett, and more specifically his bankers, were anxious about leaving Extell’s biggest project to date in the hands of an untested firm, no matter how experienced the partners. Mr. de Portzamparc was brought back on to reconceptualize the 1,005-foot tower, and he has gotten all the credit ever since. When asked about the switch, Mr. Hill said he still sees his design, its familiar bends and curves. “I feel like Christian put his skin over the building that we formed and shaped,” Mr. Hill said.

Mr. Barnett bristled at the assertion. “They were doing some work on it for a time, and we decided to go in a different direction,” he said. “Everything—the layouts, the plans—is different. That is an ugly thing for anybody to have said. It is untrue.”

Still, it would not be the first—or probably the last—time Goldstein, Hill & West is brought on to pinch hit. “These are very expensive projects; they have to work,” Mr. Goldstein said. “Star architects, it’s not for the style. It’s merely a name—it’s marketing.” Well, it works, as One57 just sold that $90 million apartment, and more may be on the way.

Still, New York is a big city, with millions of people, but only so many billionaires to house. “I think we’re starting to get away from that,” Mr. Goldstein said of the starchitect craze.

“A couple of the developers have told me,” Mr. Hill interjected, “if I just pronounced my name Stefan, maybe changed my last name to something French or added an ‘e’ onto the end, we would get all the work in the world.” 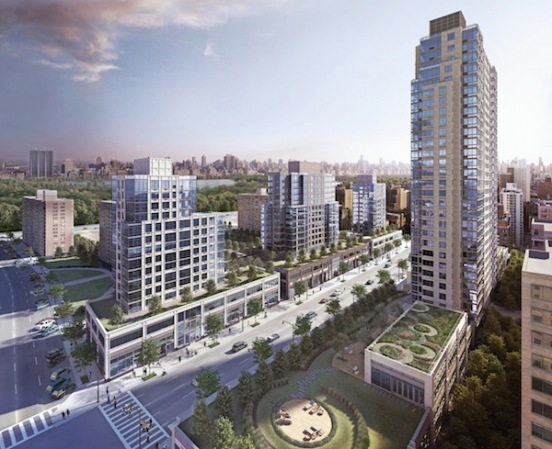