“As long as you stay indoors, you’re probably safe,” Mayor Bloomberg told the reporters at this evening’s latest press conference. But what about the people for whom it isn’t that simple? The Observer is getting reports that even as Sandy roars our way, some of the city’s most vulnerable–the homeless–are still outside.

As late as this evening, an Observer source found a group of people at Eighth Street and Second Avenue with no plans to leave for a drop-in or emergency center. “We got shelter right here,” one man told her.

Nor are they alone. Earlier today, a freelance photographer posted a lengthy interview with James, a man who seemed to believe he couldn’t go back into the shelter system for another two months and who, thanks to difficulties getting help during Hurricane Irene, seemed to have written off the emergency shelters as an option and wasn’t going to bother:

“No, they don’t want us there. These shelters are for the good folks, the families that get evacuated. There is no room in there for me.”

The city has made extensive efforts to get the word out about the coming storm, with press conferences every few hours, social media blasts and data-rich sources of information like this collaboration with Google. But those initiatives are more tailored to those of us with smartphones and stable internet connections. Different arrangements have to be made for the homeless population. Mayor Bloomberg has reassured the city via Twitter and at his numerous pressers that an “intense effort” is underway to reach those still on the streets, with an eye to those in Zone A.

To get more details on those outreach efforts, we spoke to the Department of Homeless Services spokesperson Heather Janik, who told us that outreach teams have been on the case since Sunday morning with an “extremely enhanced” presence.

“It was a larger than usual amount of people going out there and really going out there and trying to warn people about how bad the weather was going to be and making contact with as many of our known clients as possible,” she told The Observer. In partnership with the NYPD’s homeless outreach unit, the DHS’s outreach teams have managed to bring 175 people inside, and she estimates there are only about 10 “known individuals” left in Zone A.

“Outreach teams have been actively out there, getting the word out about the storm and telling them, you know, where they can come into. We have informed 311 about drop-in centers being open 24 hours a day, about shelters, it being code-blue status so anyone can walk in.”

“The teams are out there letting everyone know, and they know the people who are out there,” added Ms. Janik.

UPDATED: We also followed up with Ms. Janik for a bit more detail on the types of facilities to which the homeless approached by the outreach are being directed–specifically, whether they’re being directed to evacuation centers or to homeless shelters. She replied, “They go to special low-threshold housing I was telling you about, designed just for them (Safe Havens and stabilization beds), while some opt for drop-in centers or traditional [homeless] shelter.” Those specially designed facilities are smaller and, she explained, have different rules meant to serve the long-term homeless who might be resistant to traditional shelters.

Nevertheless, it seems that many homeless are staying put–many of them outside Zone A, which might not be as dangerous but certainly isn’t wholly safe, either. The Huffington Post has more accounts, and we’re also seeing reports on Twitter:

Just been out in Midtown – many homeless still on streets, bunked down in doorways. No sign of promised city outreach patrols. @rafsanchez

@mikebloomberg There are some homeless men on the Greenpoint Av/Manhattan Av corner. I called the local police but the men are still there.

Some stayed on the streets during last year’s Hurricane Irene. But with howling winds gusting and record storm surge predicted, Sandy stands a good chance of being a more severe redux.

“Hopefully we’ve gotten everybody that we possibly can in,” said Mayor Bloomberg at this evening’s press conference, when The Observer asked about the specifics of the measures taken thus far. “There are some people that are just very difficult, they want to avoid interacting with others, and how you get to those has always been a challenge and as far as I know, we’re doing a good job with that.”

With additional reporting by Hunter Walker. 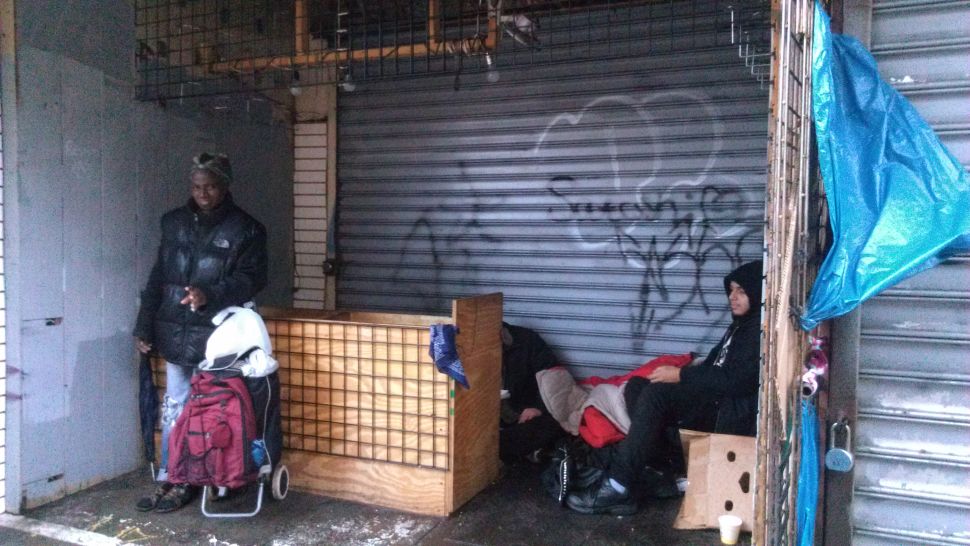