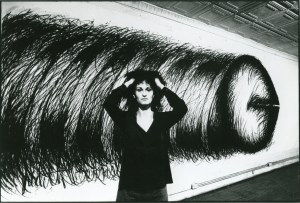 Late last week, the artist Judith Bernstein stood on the top rung of a 15-foot ladder in the New Museum’s lobby gallery, painting a thick horizontal line on the wall. She was crossing the Ts in a 66-foot-long mural of her signature. Nimble in her purple sneakers, she descended the ladder and raced around the lower areas of her name, thickening the curve of an N after hassling the two men sitting at a table who were in the way.

Ms. Bernstein, who has been making art for long enough that she’s earned the label “proto-feminist,” turns 70 this month. The show in the lobby gallery, which opens this week, is her first solo museum exhibition. In 1972, when she was a founding member of A.I.R. (Artists in Residence) Gallery, the first space in New York devoted to showing only female artists, her career seemed poised to take off. She was refining what would become something of a trademark—her “screw” drawings, massive curved charcoal scratches on paper that converge into an abrasive, bulbous form, the combination of a screw and a phallus. Her first solo show at A.I.R., in 1973 (she remembers the exact date of the opening, Oct. 1), featured the screw works and “was a bit overpowering to visitors when they came in,” she recalled. “Which is what I wanted.” The following year, a 9-foot by 12.5-foot screw drawing called Horizontal—it was particularly coarse—was censored from a large group show at the Philadelphia Civic Center called “Women’s Work—American Art 1974.” She didn’t show much after that.

She was born in Newark and brought up humbly, the daughter of a teacher and a bookkeeper. Her father, the teacher, was a Sunday painter, and he’d gather his friends in the basement on weekend afternoons to work on their art. She went to college at Penn State, where she remembers “three women to every man,” but by the time she arrived at Yale for her MFA, she was one of only a handful of women on campus.

“It was good and bad,” she told The Observer at the New Museum. “At the time I thought, ‘Oh great, look at all these guys! More for me!’ But it was difficult. Jack Tworkov, the head of the art department, said to me on the first day, ‘We cannot place you.’ Meaning that after I left Yale, I wouldn’t get a job. That was very telling, because that’s what happened. The Connecticut College for Women offered me a salary that was $1,000 less than a man. And they told me this! They said, ‘The only reason we’d interview a woman is because we want women in the class to model.’”

At the same time, her male friends—the playwrights John Guare and Kenneth Brown—were teaching her an arsenal of dirty words (“cock, dick, prick, etc. It was really great,” she said). They’d take her into the men’s restroom so she could study the lewd writing in the stalls. She saw something primal in it that became the basis for her first major works, a series of anti-Vietnam graffiti paintings emblazoned with slogans like “Jackie Kennedy Sucks John John” and “Baby the fuckin’ you get ain’t worth the fuckin’ you take,” the latter phrase emanating from a woman’s vagina that’s been adorned with an American flag. (As part of a recent resurgence of interest in her work, these were shown at the gallery The Box in L.A. last year in a show called “Fuck Vietnam.”) In 1967, she moved to New York—to this day, she still lives and works in the same space, a 1,700-square-foot studio on East Broadway—and took jobs teaching in high schools part-time all over the state. She’d commute in a Fiat that “weighed about a thousand pounds less than a VW and took about an hour to get up to 60 miles per hour.” She said it wasn’t difficult to find galleries to pay attention to her—it was impossible.

A.I.R. started with Barbara Zucker, Susan Williams, Dotty Attie, Mary Grigoriadis, Maude Boltz and Nancy Spero seeking out women artists based on files that the critic Lucy Lippard kept in her apartment. They did studio visits and picked out 14 additional artists who became the core of the gallery in its first years, and Ms. Bernstein was among them. They’d meet to discuss finding a space and what they should call themselves. The artist Howardena Pindell suggested “Jane Eyre.”

“I thought we should’ve called it T.W.A.T.,” Ms. Bernstein told me. “Twenty Women Artists Together. I was ahead of my time! Anyway, the gallery’s aesthetic was more conceptual. And A.I.R. was a code word that was printed on doorways that meant Artist in Residence. If there was a fire in a building, the firefighters would know to go to those floors and get the artists out.”

She’d been working on her screw drawings for a few years before A.I.R. started. They grew out of the graffiti work. She’d draw flathead screws and scratch over them in charcoal continuously until they transformed into something more phallic. She remembers the first one clearly.

“Ah, the first screw,” she said with a fake sigh. “‘Do you remember your first screw?’ Yes I think I do. I made my first screw in 1969—” she stopped to let out a belly laugh. “Perfect year for that, the first screw. I called it a Screw in the Box, by the way, so it had a lot of double entendres.”

In 1974 she was one of the 87 artists picked for the Philadelphia exhibition of feminist art, “Women’s Work.” It was curated by five women, including Marcia Tucker, who would go on to found the New Museum. They put Ms. Bernstein’s drawing Horizontal in the show, a big black phallus with hairy charcoal lines protruding out of it. John Pierron, the center’s director, and Marian Aguilera, the in-house curator, pulled it from the show immediately. Mr. Pierron gave an interview to the Philadelphia Evening News where he talked about the drawing like it was bad smut, saying “I have yet to see the redeeming social value in the work.” A petition in Horizontal’s favor, comparing the drawing to Ulysses, was signed by Louise Bourgeois, John Coplans, Clement Greenberg, Alice Neel and a variety of other artists and critics, but the piece remained unseen. The artists talked about whether they should cancel the exhibition, but that’s not what Ms. Bernstein wanted. In 1974, it was too important for women to show their work anywhere at all. At the opening, everyone wore a button that said, “Where’s Bernstein?”

It’s not that Ms. Bernstein disappeared; she just didn’t play along with the art world. She’s never had gallery representation and, despite teaching for decades, she’s never been on faculty anywhere, though she is in the permanent collection at the Museum of Modern Art. She’s often included in feminist surveys, but she was left out of 2007’s “Wack! Art and the Feminist Revolution,” the first major museum retrospective of early feminist art. The oversight didn’t go unnoticed; the critic Richard Meyer wrote a lengthy essay about her, along with some other exclusions like Anita Steckel and Eunice Golden, in the exhibition catalogue.

The dealer Mitchell Algus had shown most of the artists mentioned in the essay. In 2008, he gave Ms. Bernstein her first solo gallery show in New York since the ’80s.

“I was aware of her work from looking through old magazines,” Mr. Algus told me. “There’s a famous picture of Judith standing in front of one of the screw drawings, holding this mane of black hair up in the air. Being a young man at the time, I physically remembered that.”

The artist Paul McCarthy came by Mr. Algus’s gallery while Ms. Bernstein’s exhibition was up and showed the work to his daughter, Mara McCarthy, who runs the Box in L.A. Suddenly Ms. Bernstein, who had been absent from the mainstream for so long, had everyone’s attention. Next came a show at Alex Zachary Gallery, in New York. In an email to me, Mr. Zachary described his space as a “fake-modernist townhouse on the Upper East Side, which sort of begged to be defaced.” Crawling around it on scaffolding, Ms. Bernstein did a monumental painting of her signature that stretched across an entire wall and down the stairs to the lower level. While she was working, she fell and broke her elbow. She kept painting for another three hours, finishing out the day. “I didn’t want to lose that time,” she told me, slate-faced. The next day, she returned to the gallery with her arm in a pink sling and painted with her other hand.

All of this has culminated in the mini-retrospective tucked away in the small gallery attached to the New Museum’s ground floor, reintroducing the art world to one of the most frustratingly underappreciated artists—male or female, feminist or not—working today. For the next three months, the name Judith Bernstein will be the first thing people see when they walk into the museum, in big black bleeding letters, which is how Ms. Bernstein wants it.