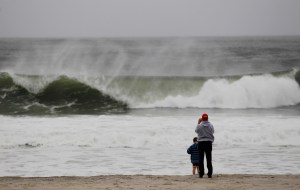 As Hurricane Sandy crawls its way up the Eastern seaboard, it is already causing some disruptions in the art world. A handful of evening openings on the Lower East Side were canceled by dealers today. Though most of the area’s galleries are located well outside the potential flood zones, New York State’s plan to close the subways at 7 p.m. meant those receptions were likely to be sparsely attended.

Among the openings falling prey to the weather: Barb Choit’s sophomore show at Rachel Uffner, the Karen Archey-curated “Deep Space (insides)” group outing at Joe Sheftel and JTT’s Cole Sayer exhibition. Bushwick nonprofit NurtureArt’s also canceled its benefit at the L.E.S.’s Charles Bank gallery. Most dealers have rescheduled those events for a week from today, Nov. 4, while JTT is opting to open next Friday, Nov. 2.

Though many openings were nixed on the L.E.S., where most galleries operate on a Wednesday-through-Sunday schedule, a brief (though by no means exhaustive) jog through the neighborhood this afternoon found not one dealer closing up shop early. While it was not as busy as a typical Sunday, the area’s most popular day, there were people out and about, visiting those intrepid dealers.

Flooding is a more serious threat in West Chelsea. Many blocks filled with galleries, including those west of 10th Avenue, between West 20th and West 26 Streets, are in the so-called Zone A, which New York City Mayor Michael Bloomberg has ordered to be evacuated. The galleries in that zone include both of Gagosian’s Chelsea outposts, Mary Boone, Luhring Augustine and dozens more.

In much of the commercial and museum world, Monday is a day of rest, and many institutions are taking a wait-and-see approach to see whether they will reopen on Monday. The Metropolitan Museum, typically closed on Mondays, has also canceled all special events, and the Jewish Museum closed at 4 p.m. today saying that it will reopen “once more information is available on transportation status and progress of the storm.”

Dealers and their art handlers, of course, went through all of this not so long ago, in August 2011, when Hurricane Irene led many galleries to set up sandbag bulwarks against any impending flooding. Following that storm, there were no reports of serious damage to galleries.

The New York Observer and GalleristNY will have reports throughout the day tomorrow on the storm and—to be sure—various other goings-on in New York and the international art world.

Stay safe out there, folks.