Manhattanites can count on at least a few immutable facts: that it will be impossible to catch a cab at 5 p.m., that the Long Island Expressway will be a parking lot on Memorial Day and that every night at 8 p.m., Il Mulino will be so crowded that the celebrities, business magnates and politicians who frequent the famed Italian restaurant will rub elbows not only with each other, but very nearly with each other’s ossobuco.

Jerry Katzoff, who bought the iconic Greenwich Village eatery with Brian Galligan in 2001, was eating there one night when he noticed that his table’s corner was jutting through the open-backed chair of a neighboring diner.

“I felt bad. I owned the restaurant and it was going into his back. So I pulled the table and I startled the guy,” Mr. Katzoff told The Observer. “I said, ‘The table was in your back,’ and he said, ‘Are you kidding? To get a seat at Il Mulino? I don’t care what you do.’”

It’s that kind of place. It’s been that kind of place since it opened 31 years ago. Reservations are impossible to get, although regulars always seem able to swing a seat at one of the 17 tightly packed tables. (Rumors swirl of a VIP line.) George Clooney was there the other week, and so was the rapper Drake, accompanied by a sizable entourage. Tommy Mottola, Tony Bennett and Ronald Perelman are regulars. When Bill Clinton needed a place to have a tête-à-tête with Obama, he picked Il Mulino. Asked how the lunch had gone, Mr. Clinton told the Times, “It was good. It was Il Mulino, how could it not be?”

Il Mulino has what every restaurateur covets—that rare, elusive magic that makes a restaurant feel like the place where everyone wants to be. It is a fickle magic, hard to capture, difficult to maintain and almost impossible to replicate.

Except that replicating it is precisely what Mr. Katzoff and Mr. Galligan set out to do when they bought the restaurant, envisioning a chain of Il Mulinos across the country and the world, all of them brilliant, sparkling successes just like the first. It hasn’t gone exactly that way. In the last eight years, they have opened thriving Il Mulinos in Miami, Long Island, Las Vegas, Tokyo, Aspen, Puerto Rico, Atlantic City and Disney World, but the eateries in Houston, Atlanta, Washington, D.C., and Chicago have all closed.

Now they’ve ventured what could either be their safest foray or their riskiest—an outpost on the Upper East Side, which opened earlier this month after a series of socialite-packed tastings arranged by the restaurant’s publicist, Lizzie Grubman, a savvy choice, given her considerable skill at generating buzz. When she helped open Moomba—a now-shuttered downtown eatery and lounge that was for a brief time in the late 1990s The Place To Be—she had the restaurant tell callers that there weren’t any reservations, even though the place was empty.

“Those are the tricks we would play to make a restaurant hot,” she said. “But with Il Mulino, I don’t need to play any tricks.”

The Upper East Side may seem, at first glance, like difficult terrain—the well-heeled crowd that does the bulk of its socializing between Fifth and Park has been rotating between Fred’s, Cipriani, Amaranth and Nello for ages. Creatures of habit though they may be, many Upper East Siders, particularly the younger ones, are hungry for something different.

“We eat in the same few places all the time; there aren’t that many new restaurants in the neighborhood,” said Shoshanna Gruss. “I mean, I go to Mezzaluna every single Sunday, but I’ve done that since I was 12. I’m always saving things I read about downtown restaurants, thinking, ‘we’ll go there someday,’” she laughed. “It’s nice that this is a two-block walk and you don’t have to worry about the president being in town,” she said. “There’s not a lot newness up here.”

Still, opening a second branch of a beloved New York restaurant within the city limits is a tricky task to pull off. As any starlet knows, the spotlight is never as bright when it’s shared. A second location runs not only the risk that it will sputter out and die, but that it could also drag down the original Il Mulino, a commodity the owners guard carefully. When an opportunity to buy the building next door on West Third Street came up, they declined, fearing that a larger dining room would ruin the intimate mood.

“It was a hard decision,” said Mr. Katzoff, when The Observer met him and Mr. Galligan for lunch at the uptown restaurant last week. “If we opened a second location and the reservations went down, then the dynamic would change at our anchor. Il Mulino is the greatest brand. It’s our Mercedes-Benz.”

“You don’t want to bastardize the brand,” said Mr. Galligan. 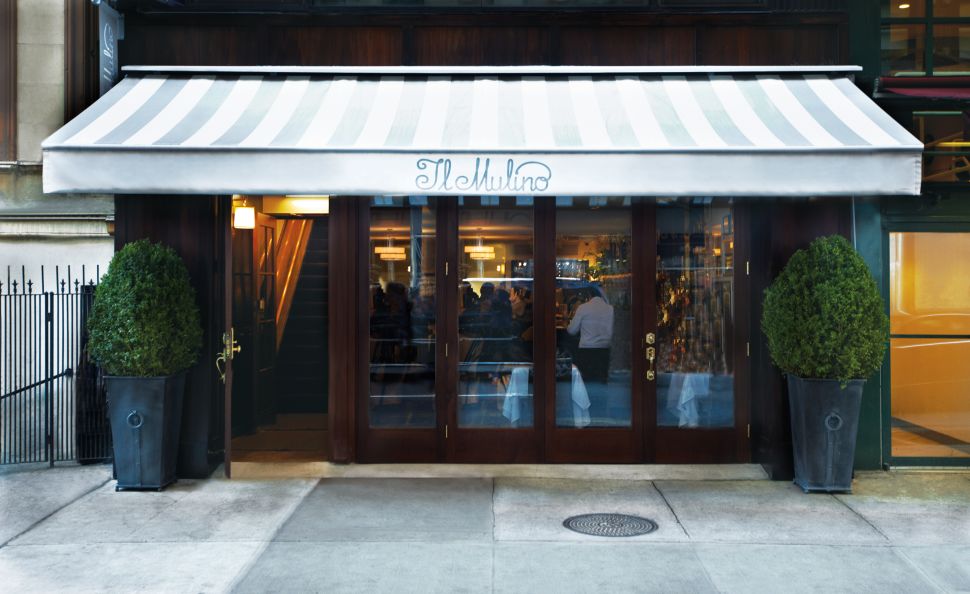