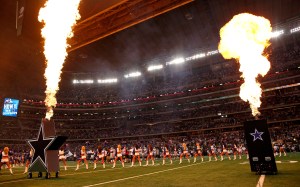 Last night was a rough one for Dallas Cowboys fans, with their men losing to the Chicago Bears 34-18. On the plus side, they got to look at text works by Jenny Holzer on their stadium’s gargantuan video monitor periodically during the game.

Some of the choice “Truisms” that Ms. Holzer selected for the stadium include “A RELAXED MAN IS NOT NECESSARILY A BETTER MAN” and “JUST BELIEVING SOMETHING CAN MAKE IT HAPPEN,” which Michael Granberry of The Dallas Morning News terms “deliciously appropriate” for the storied franchise.

Mr. Granberry spoke with Ms. Holzer, who is the 37th artist to enter the Cowboys’ rich art collection, and she said that she was pumped about the project: “I’m a lucky duck.…I was invited, and I was enthusiastic. A lot of people talk about making public art, but the Cowboys are doing it.” The whole article is available here.

The Cowboys are now 2-2, and there’s still plenty of time for them to move above .500. Cue up Ms. Holzer: “PUSH YOURSELF TO THE LIMIT AS OFTEN AS POSSIBLE.”