Ever since the Swedes gave Obama the Nobel Prize before he’d actually done anything, I’ve wondered what goes on behind the closed doors of the secret chambers where they bestow such honors.

It’s not that Mr. Díaz hasn’t written a great novel. The Brief Wondrous Life of Oscar Wao didn’t captivate me, but that’s because I’m not inclined to care that much about tubby science fiction geeks with girl issues, even when limned in the admirably deft and much-praised brushstrokes of Mr. Díaz’s affecting, hip Spanglish prose. In the five years since then, Mr. Díaz has written just one other book, a short story collection called This Is How You Lose Her.

But, in his brief wondrous literary career so far, Mr. Díaz—now a tenured professor at MIT—has collected more medals than Michael Phelps. Starting with his Pulitzer for fiction in 2007, awards have stuck to him like burrs. He’s bagged a National Book Critics Circle Award, a Guggenheim, the Rome Prize from the American Academy of Arts and Letters, the Lila Acheson Wallace Readers Digest Award, a PEN/Malamud Award, a US-Japan Creative Artist Fellowship from the National Endowment for the Arts, a fellowship at the Radcliffe Institute for Advanced Study at Harvard, the John Sargent Sr. First Novel Prize and a raft of lesser-known (to me anyway) awards including the Anisfield-Wolf Book Awards, the 2008 Dayton Literary Peace Prize for Fiction, the 2008 Hurston-Wright Legacy Award and the Massachusetts Book Awards Fiction Award in 2007.

Oh, and he now sits on the 20-member Pulitzer Committee himself, perhaps in a newly created job counseling young writers about how to cope when the psychic and emotional weight of all their awards gets too heavy and they find that all their friends hate their guts.

There’s something about giant literary awards that attracts other awards, like protons and electrons. But is it possible that one young writer could be deserving of all these prizes? Was there truly not another worthy writer during the last five years to whom the judges at the American Academy of Arts and Letters, say, could have granted a prize, given that their chosen boy had already had bagged a Pulitzer and a Goog?

These are subjective calls, and I reveal my own biases when I admit I would have awarded the Genius grant to Gillian Flynn for Gone Girl and her weird, sickly meditation on mother-daughter resentment, Sharp Objects; or to Lauren Groff for Arcadia, her heartbreakingly beautiful end-of-an-era novel about the generation born of hippie parents. And I’m not being sexist. There are even men who deserve it: Jess Walter, for Beautiful Ruins, and Jonathan Dee, for The Privileges—two writers whose work is brilliant, engrossing and revealing about our times.

This brings to mind a perhaps apocryphal quote I’ve heard attributed to Hemingway (but cannot find in any Google search this morning): “Literary prizes are like life jackets tossed to men who know how to swim and have already reached the shore.”

So far in his brief wondrous life, Mr. Díaz has reached the shore with books exactly three times. He published a well-received collection of short stories first, called Drown, followed by galloping blockbuster Oscar Wao, and then, five years later, his new collection of short stories about love from the point of view of a helplessly philandering male narrator whose wayward urges prevent him from finding lasting love.

The colorful and insular world Mr. Díaz reveals in his writing is particular, but the universal theme is male concupiscence. Oscar Wao’s titular antihero moves to New Jersey from the Dominican Republic and comes of age in America. But the book’s chief narrator is Oscar’s roommate Yunior, a self-described “player” who can’t stay true to his girlfriends and is compelled to mess around with all their sisters too.

At one point Yunior shows a touch of self-awareness: “What I should have done was check myself into Bootie-rehab,” he writes. “But if you thought I was going to do that, then you don’t know Dominican men.”

Yunior reappears in This Is How You Lose Her as a professor and writer who cheats on his girlfriends. The key plot point is curiously the same in many of the tales: the girlfriend discovers his infidelities because she cracks open his notebook and reads his diary notes about the encounters. Or, she reads his emails.

Don’t you hate when that happens? The reviewers adore it. Calling Yunior “a Latino love rat in New Jersey,” The Guardian writes that “the chief pleasure of these stories is the unflinching honesty Díaz brings to the subject of betrayal.” Noting that Díaz “writes best about players,” The L.A. Times says “it’s the voice of male-driven sex and love obsessions that makes Díaz’s stories most memorable.”

Reading the short stories in the collection, I had a nagging sense of familiarity. At first, I couldn’t put my finger on it, then I realized who Yunior reminded me of: Harry “Rabbit” Angstrom.

Yes, the booty-chasing white suburban alter ego of John Updike, one of the great phallocrats of 20th century American letters, a man also constitutionally unable to cross the street with getting a literary award stuck on his shoe. And not just Updike, but Philip Roth and Norman Mailer too.

The demise of such fiction was predicted not so long ago in the pages of this very publication. Sven Birkerts, writing 15 years ago, noted that the postwar male ego in fiction was going the way of the Marlboro Man.

And no less a literary light than the sainted David Foster Wallace, also writing in these pages a decade and a half ago, called Updike “just a penis with a thesaurus” and predicted the end of the primacy of “Great Male Narcissists in American fiction. “Most of the literary readers I know personally are under 40,” Wallace wrote, “and a fair number are female, and none of them are big admirers of the postwar G.M.N.’s.”

Fifteen years after those declarations, literary awards jurors are irresistibly drawn to this Latino Updike, if you will, younger, hipper, bilingual, less prolific certainly, but still plowing the same field as his predecessors, along with the same sorts of all-too-accommodating women. The heart wants what it wants, right? Like the GMNs of yore, Díaz’s alter ego is utterly beholden to his wandering penis, yet never examines his compulsion to bone everyone in sight.

In showering Mr Díaz with prize after prize, literary jurors seem to be saying the post-war GMN isn’t dead yet. Is it the wars, the terrorism, the recession, driving the longing for a regenerated machismo that Mr. Díaz’s multi-culti cred makes acceptable again? Is it a feminist backlash?

I suspect that there’s more to Mr. Díaz’s multiple awards than either sheer talent (which he does possess), latent machismo among male awards-granters or even wish fulfillment for a bunch of pointy-headed dweebs. Mr. Díaz has acknowledged being guided in his writing career at Rutgers by two female titans of the post-male, multicultural literary establishment: Sandra Cisneros and Toni Morrison. In the end, Mr. Díaz’s crowded awards shelf might have as much to do with wise investments of “Who You Know” currency as anything else.

Last week, Mr. Díaz was on CBS This Morning talking to Charlie Rose about how the windfall will change his life. “It gives you an enormous amount of time and room,” he reflected. “I told a friend of mine, it’s like finding an extra bedroom to your apartment.” Yunior would certainly put that chamber to good use.

Nina Burleigh is the author of The Fatal Gift of Beauty: The Trials of Amanda Knox among other books. Follow her at @ninaburleigh. 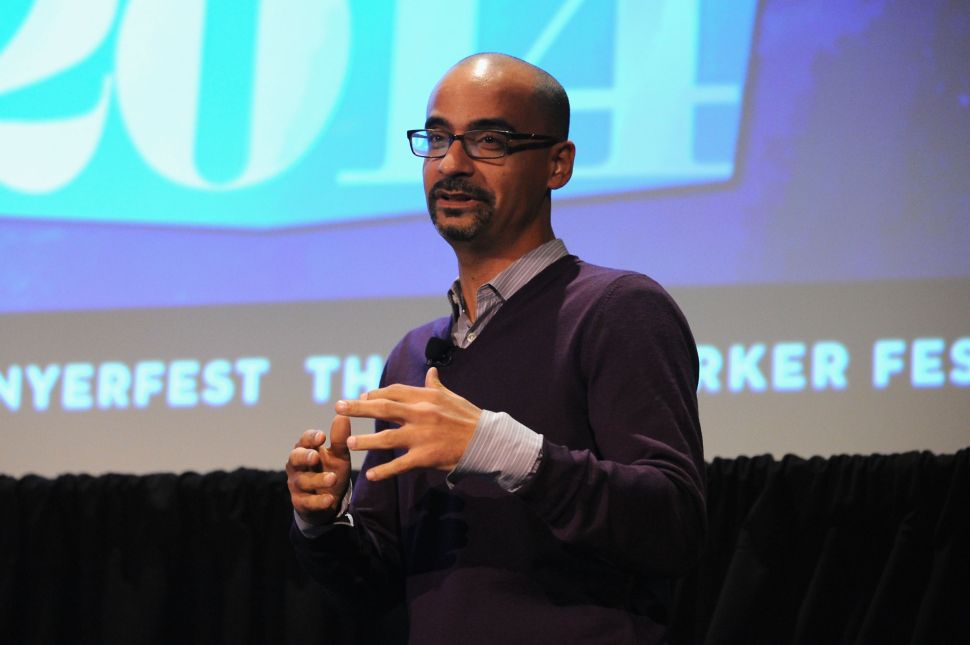