Predicted track of the storm. (NHC)

We hope you made use of the public transportation available before 7 p.m. Sunday and are not reading this from Zone A, which as NYC.gov tells us, should be empty now. Evacuation orders have reached across the waters as well, affecting New Jersey and Connecticut.

The City of Hoboken wants everyone out of “all ground floor apartments” by midnight Sunday night. They urge residents on upper floors to offer street-level neighbors lodging. Hoboken shelters will allow pets as well, as long as they are safely crated.

The mayor of Stamford Connecticut also ordered mandatory evacuations for some residents there on Sunday. Stamford Mayor Michael Pavia’s evacuation order also targeted street-level residents. The mayor said, “Due to expected high tides, unprecedented storm surges, and heavy rains, I am advising anyone that lives in a low-lying area or along river flood plain areas, to relocate to higher ground.”

Hurricane Sandy only continues to grow more epic–blizzard warnings have even been issued for interior portions of some mid-Atlantic states south of New Jersey.

The 5 p.m. advisory from the National Hurricane Center did not mince words regarding the potential danger of the storm: 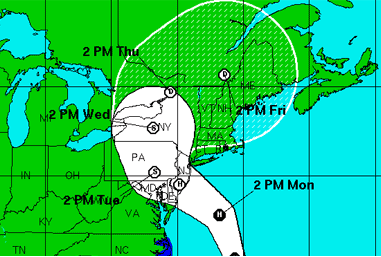