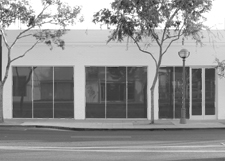 The New York dealer Matthew Marks may be notoriously circumspect when it comes to conversation, but there’s at least one area where he’s expansive: real estate.

Earlier this year, the dealer opened a 3,700-square-foot space in West Hollywood, his first outside New York, and now, Gallerist has learned, he has plans to open a second space just around the corner. The new 5,000-square-foot beauty sits at 7818 Santa Monica Boulevard, the former home of another Gotham export, the Trinity Boxing Club.

Adrian Rosenfeld, a director who now works mostly out of California, said the expansion was a project five years in the making. “Los Angeles has more working artists, more art schools and more energy than any other world city at this time,” Mr. Rosenfeld said.

Mr. Marks isn’t pulling any punches out West. On Nov. 1, he’ll open the Santa Monica gallery with a show by Jasper Johns that will expand to the original space at 1062 North Orange Grove and mark the first ever show of new work by the artist in Los Angeles.

The new gallery brings Mr. Marks’s grand exhibition space total to six. Santa Monica is rented, but North Orange Grove is owned by Mr. Marks. Property records show that it was recently sold for just over $1 million to a California LLC called Lavender Mist, presumably after the 1950 Jackson Pollock painting that hangs in the National Gallery of Art in Washington, D.C.